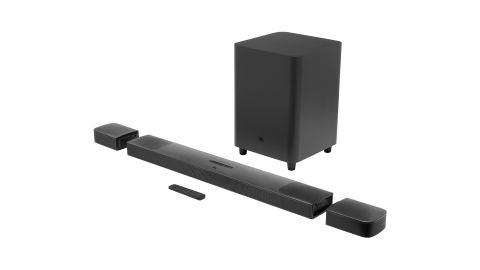 The JBL’s detachable speakers provide proper surround sound and are a big selling point, but its rivals are sonically superior

Imagine a crossfader between convenience and quality with a soundbar at one end and a full home cinema speaker package and amplifier at the other. Somewhere towards the middle is a space that the JBL Bar 9.1 is aiming to occupy.

It looks like a single soundbar and sub, but this is something similar to a Transformer toy. Remove the two ends of the bar and place them behind and to the side of your seating position and they become the dedicated, true wireless, battery-powered rear speakers in a surround sound set-up. It’s the sort of thing that Optimus Prime might have at home.

Complete with upward-firing speakers on both the main bar and the satellites, it represents a real effort to completely fill your room with AV audio. Are we looking at the new normal for modern TV sound? We certainly hope so.

Until someone invents detachable wireless speakers that stick to the ceiling, this is as easy as Dolby Atmos surround sound gets. The main bar is a practical 88cm across and, at just 6.2cm high, it’s short enough to sit at the feet of most TVs without obscuring the screen.

Connections HDMI out, HDMI in, eARC, Optical out

Inside the soundbar, there are four oval-shaped midrange drivers facing forward and arranged into the front three channels of the surround along with three 20mm tweeters. On the top surface, facing upwards, are two full-range drivers for the front section of the Atmos effects.

The removable rear speakers on each end are attached by a set of good, strong magnets. When docked, they charge up their 10-hour battery over the course of three hours, during which they will still operate if you are watching TV or listening to music. Detach them with a firm tug, though, and the fun begins.

At 17cm tall, they are ideal for popping on a solid surface, such as a table, just over a metre off the floor. You can wallmount them – brackets are included – but the joy of this bar is the flexibility on offer.

The speakers can be perched on the back of your sofa, up against the wall, on a window ledge or wherever is most convenient. Ultimately, the JBL’s flexibility means you can avoid rearranging your furniture or purchasing extra speaker stands that are associated with a more traditional home cinema set-up.

Within these satellites are four more channels of sound. Each has an upward-firing, full-range driver for the final two Atmos speakers as well as another 20mm tweeter apiece for the surround effects. The missing midrange speakers on the rears seem like a bit of an odd omission.

The subwoofer is massive, at 30cm tall and 44cm deep, but that’s not necessarily a bad thing. Yes, it takes up rather a lot of space, but the bulk gives room for a hefty 25cm down-firing drive unit. In total, these drivers amount to a 5.1.4 arrangement.

Getting the JBL Bar up and running is a doddle. There’s no app, which is a little unsettling at first, but thanks to a tidy, feature-packed remote, plus Chromecast and AirPlay 2 support, there isn’t any need for one. You may be glad not to have yet another piece of bloatware clogging up your mobile phone.

There are wired and wireless connections for the internet, a choice of optical or eARC HDMI (HDCP 2.3) for source connections, plus an HDMI-in for 4K passthrough, which is also Dolby Vision-compatible. You can send music to the bar via Bluetooth, but it should be noted that the USB socket is only for software updates.

We'd ideally like to see a few more HDMI inputs. While the eARC connection means sources can be routed through your TV, doing so isn't always straightforward, and going direct is generally preferable. That said, the JBL isn't the only soundbar to go down the minimal inputs route - the Sonos Arc no dedicated HDMI inputs at all.

Once connected, your next move is calibration and that’s largely a two-part process. First, is the tone-firing auto-calibration, which you can redo any time you like. The second is a set of three adjustments that you can make from the remote. You can set the Rear effects to Low, Medium or High; the same for the Atmos effects; and then the sub can be set at levels of force from 1-5.

There’s also a facility for reducing the Rear and Atmos effects to almost nothing by switching into Standard Mode – handy if you don’t like your news or weather reports delivered with home cinematic drama. Mercifully, lip sync issues are also taken care of, thanks to an audio delay adjustment.

It should be noted that these features aren’t the easiest to discover. Pressing and holding certain buttons on the remote activates them, but the explanations are only found hidden away deep inside the manual.

Starting with David Attenborough’s Seven Worlds, One Planet, we get a good idea of how well this soundbar fills a room. We’re down in the jungle of the Cote D’Ivoire with a troop of chimpanzees and those Atmos speakers are really firing on all cylinders to create a worthy soundstage that wraps around us.

The sounds of the forest fill our space from top to bottom. Bird calls and frog croaks come tweeting from left and right. We can tell just where the other chimps, off-camera using their tools, are supposed to be, and there are sounds of cicadas everywhere. It’s like our viewing room is hanging with vines. It might be our imagination, but it’s beginning to feel a bit humid too.

When the effects are static, this JBL delivers Atmos with a sense of height and depth that you don’t get with more conventional alternatives. However, soundtracks are rarely as kind as this. When the noises start moving, the JBL’s spatial skills break down somewhat.

More telling are the problems with this device’s core job of supplying good quality audio. Dynamics are particularly poor, even at the subtler end of the spectrum. Attenborough’s voice over is clear but devoid of any real sense of feeling. There’s little emotion when he talks of the tragic loss of wildlife – the production from the JBL’s centre channel is far too flat and bland.

Switching to a pure audio experience, we play All These Things That I’ve Done by The Killers. The rendition doesn’t compare well to the five-star, non-Atmos, Dali Katch One, which is now available for considerably less money. Again, it’s short on dynamics – the pips in the intro don’t fade in and out of the darkness like they should and there’s not an awful lot of detail to get excited about.

It’s missing drive, richness and character, and really only delivers on weight from the sub and the breadth of the soundstage. Even then, the bass is lacking tunefulness. It’s just about firm enough, but it's not very flexible or subtle.

It’s a sense that carries through as we switch to Guardians Of The Galaxy Vol. 2. The 70s/80s soundtrack doesn’t have the appeal it should and, for all its static spatial trickery, this JBL bar comes a little unstuck with the fast-paced effects that this picture demands.

During the earlier chapter space battle with the Sovereign, we get a good sense of dimension to the audio, but it doesn’t deal with moving objects particularly well. The handover as a drone ships flies from one side to the other isn’t smooth or sophisticated. Laser blasts feel picked and placed into the left and right surround channels, rather than having a sense of organic movement, which rather undermines the feeling of immersion.

It's often thought that Atmos is all about adding height to the sonic presentation, which this JBL does ably, but it's really about creating a three-dimensional soundstage with precisely places effects, and here it falls short. Watching Rocket’s skirmish with the Ravagers on Berhert, it misses the close, quiet feel of the forest camp. When the night breaks into the explosions of Rocket’s booby traps, panicked machine gun fire and subsequent screams, it becomes a sonically busy scene that’s too demanding for the soundbar’s speakers to cope with.

The gunfire turns into a smear of sound rather than a distinct rattle of individual bullets. Again, there’s plenty of weight to the effects from that big sub, but not much else to feel good about.

In terms of room-filling scale and window-rattling bass, this soundbar delivers. It fills a room better than almost any other soundbar, too, thanks to those detachable surrounds and four dedicated upward-firing drivers.

But in its effort to go bigger and add more, JBL appears to have forgotten the fundamentals. Once you’re over the initial ‘wow’ factor of the spatial fun, you realise the sound being delivered is decidedly dull. A device such as this should make movie night something special, but the Bar 9.1 is lacking the agility or dynamism to really draw you in to what you're watching.

Despite that, we're already really looking forward to the Bar 9.1's successor. Conceptually, this is a great bit of kit, and with an injection of sonic excitement it could be the perfect solution for those who want a proper home cinema experience from something more convenient than a full home cinema package. Over to you, JBL.