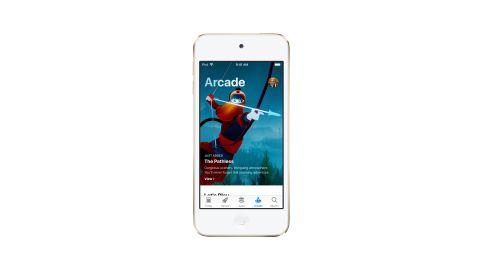 Somewhat bafflingly, we’re now at a point at which a director could use the original iPod to date a scene, but, paradoxically, they couldn’t with a turntable.

Watch Baby Driver, a film in which an aloof millennial pays off a debt to Kevin Spacey by being his go-to getaway driver, and what stands out most is his collection of iPods in lieu of a wittily titled Spotify playlist.

Though this, the 7th generation of the iPod Touch, is the last remaining descendant of the original, it is testament to Apple’s aptitude for evolution and adapting to its surroundings that one of its most iconic products still has its place in what is a wholly different world from 18 years ago.

This is a family, remember, that began when every town still had a Woolworths, and that predates the Xbox by almost a month.

What carries the iPod name now is effectively a smartphone without the cellular connection. As well as its core function as a personal music player, the Touch has a 4in retina display screen for watching films and playing games, an 8MP camera for capturing HDR photos and 1080p HD video, and a front-facing lens for use with FaceTime. You can also use Messages, with a wi-fi connection, to speak with anyone else using a compatible Apple device.

Running iOS 12, the iPod Touch 7th generation is also compatible with the company’s voice assistant, Siri, while the iPod Touch’s A10 Fusion chip is capable of being twice as fast as its predecessor, with three-times better graphics and AR gaming support.

That makes it a useful all-rounder for those without a smartphone, boasting features few other manufacturers could match in a PMP at any price, but with our focus on its music performance it’s good to see Apple’s is there too.

The cheapest model, costing £199, has 32GB storage, which is ideal for those using their iPod mostly for streaming, but Apple also offers 128GB (£299) and 256GB (£399) versions for those who own lots of files they want to store and take on the move.

Its compatibility is varied, too, able to play files in AAC, MP3, PCM, Apple Lossless, FLAC and Dolby Digital formats, while a full charge will return up to 40 hours of music playback (or eight hours for video).

Available in six colours, Space Grey, Gold, Silver, Pink, Blue and Red – the latter a (Product)Red venture that includes a contribution to the Global Fund to fight AIDS – the iPod Touch also comes with Apple’s wired EarPods (the 3.5mm headphone jack lives on in the Touch). However, you’ll inevitably want to be pairing it with some more talented headphones when you hear what it is capable of.

In terms of tonality and overall character, the 2019 iPod Touch is a very Apple-sounding product. It gets everything right, without overstretching itself in any regard. Balance is even, rhythms snap in time and there is enough dynamic interest to discern between varying moods and genre.

It’s something we’ve long appreciated about the iPod, and indeed iPhone, in that it simply presents our music with a degree of enthusiasm and doesn’t appear to be trying too hard to push anything it particularly wants us to hear.

Compared with a flagship iPhone such as the iPhone XS Max, the Touch sounds a little smaller and less authoritative, with bass weight dialled back and dynamics slightly less pronounced, but that it is even in touching distance in those respects is quite a thing. Besides, that slightly leaner presentation adds even more snap to the iPod’s already fleet-footed delivery.

Given the iPod Touch’s extensive feature set and comparably low price, it would only need to be decent for us to be able to recommend it. However, this seventh generation is more than that: it proves there is still a place for the iPod in this market of smartphone streaming and premium hi-res PMPs.