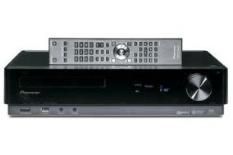 Filling a gap in the market where there wasn’t even a gap before, Pioneer serves up the year’s most intriguing oddity so far

Billy Connolly once memorably included ‘hat and shoes to match' and ‘coat-hanger with built-in cigarette lighter' on a register of innovative ideas that were doomed to failure.

We'd hesitate to include Pioneer's PDX-Z9 on that undistinguished list, as it's brimming with useful and complementary features, but there's no denying it's a product that has come somewhat out of leftfield. The once-moribund stereo receiver may have received an Arcam Solo-driven shot in the arm lately, but the PDX-Z9 expands the concept in all directions.

It generates its 50 watts per channel digitally, further embraces modernity in the shape of internet radio, home network ability and iPod control, welcomes the antiquated with its dedicated phono stage, and even accommodates the obstinate with SACD playback.

In addition, the Pioneer is packing AM and FM RDS radio, a USB input, a line-level recording loop and CD playback. Functionality down the ages, in other words.

A feature-packed, glossy black box
All these features are housed in a regular-size, glossy black box with a nice bright display and some touch-sensitive controls on top. The remote control, inevitably, is groaning under the weight of all those buttons, but the PDX-Z9 is nonetheless simple and intuitive to use.

In both cases, though, there's a languor at the bottom end and a definite lack of drive or attack – the Z9 seems better equipped to lull a listener to sleep than to drag one onto the dancefloor.

But listening to the same songs stored at 320kbps on an iPod and played via the Pioneer's dedicated umbilical connection, the sleepiness of the sound disappears, replaced by an altogether more vigorous signature.

The CD/SACD transport lets the side down
We can only conclude that, while the PDX-Z9's amplification has the authority to show recordings the whip when necessary, its SACD/CD transport is letting the side down.

FM radio reception is good and strong, and AM reception is the usual dog's dinner that Pioneer can't be held responsible for.

Using its Ethernet terminal to access internet radio, the PDX-Z9 does its best with the hopelessly variable quality of material available – 32kbps of Jamaica's Roots Rock Reggae sounds pretty atrocious, while France's divine FIP at 128kbps is delivered with useful separation and vim.

An enjoyable phono stage adds to the appeal
The Pioneer's phono stage is enjoyable too, retaining the trademark vinyl fluency and bounce that can sometimes be emasculated by digital amplification. No matter which of the many sources you're listening too, though, we'd advise you leave the ‘loudness' button and various ‘sound modes' well alone.

For a while, we weren't quite sure what we thought about the Pioneer PDX-Z9. After all, it does many, many things in one box – but it doesn't do any of them with what you'd call stunning success.

On the other hand, it's never disgraced – and at the money it offers an unlikely amount of flexibility and functionality. If you're a matching-hat-and-shoes type of person, you'll love this Pioneer.