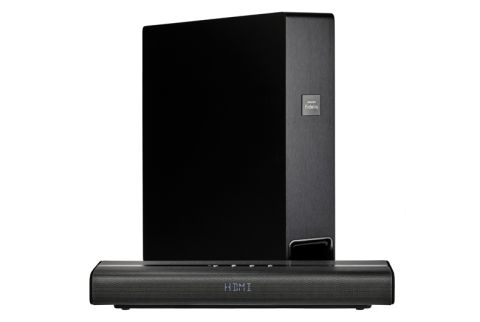 The B1’s smart, compact design is let down by its lacklustre sound quality and high price

We had high hopes for the Philips Fidelio B1.

The tiny soundbar with wireless subwoofer is designed for small rooms and small TVs, and it seems like the perfect antidote to the long, bulky soundbars taking up space both in the market, and in front of our TVs. But its sound quality doesn’t justify that high price.

At £450, it has to beat the Award-winning Q Acoustics Media 4 (which is our recommendation at £330) and, considering the B1’s form, it also has to be better value than the £200 Acoustic Energy Aego Soundbar, which is similarly designed for small spaces.

MORE: Philips 2016 TVs – everything you need to know

Philips is off to a good start when it comes to the B1’s design. The main unit is solidly built and encased in a metal grille that makes it look rather smart.

Philips calls it the “nano cinema speaker”, and it’s certainly slim and compact, and the ideal size for placing in front of your TV, especially if you have very limited shelf space.

Of course, you can’t expect a huge amount of bass to come out of such a small unit, which is why Philips provides a separate subwoofer.

It’s also slim and discreet, and connects to the main bar wirelessly, so you can tuck it away anywhere in your room. A stand is included to keep the subwoofer upright when positioned vertically, but we found it stayed stable on its own too.

The metal buttons on the soundbar are lovely to use when switching inputs or changing the volume, but you do get a remote for all those functions, too.

You can adjust the treble and bass of the B1, as well as switch between music and movie sound modes using the remote control.

We’re amazed that Philips has managed to pack in such a generous amount of connections into this little unit. Hidden away behind the bar are HDMI and optical inputs, and a 3.5mm auxiliary for plugging in music players.

There’s even an HDMI ARC (audio return channel) output for your TV. A simple LED display glows behind the metal grilles of the main bar, with big letters indicating which source you’ve selected.

You’ll notice a USB port as well, into which you can plug in a memory stick full of songs. The Fidelio B1 doesn’t support any hi-res music, but standard resolution WAV or MP3 files should be fine.

If you’re playing music through the B1, Bluetooth is quick to connect to your smartphone, and you can stream any song stored on your device or from your music services.

The B1 delivers a surprisingly wide spread of sound for its size. There are two drivers placed at either side of the main bar, with two more in the middle. Philips uses ‘microbeam’ technology to produce that wide arc of sound, and a 5.1 amplifier powering all six channels (including the sub).

For such a small unit, it goes fairly loud, too, and coupled with the wide soundstage, you’ll feel immediately drawn into the film you’re watching. There’s a decent amount of detail.

You can follow the pinging gunshots in the John Wick Blu-ray, get a sense of the atmosphere inside the elegant Continental Hotel, and follow the deadpan dialogue.

But that’s where the good news seems to end. There’s plenty of bass, but not a whole lot of detail and weight underpinning the B1’s sound, and as a result, sound effects don’t make a satisfying impact or have strength of conviction when whizzing around the screen.

The Philips has a lean presentation, with a coarseness at the edge of the midrange that’s difficult to smooth out even after a few nights running in.

Voices are delivered clearly and directly, which works fine enough for dialogue-heavy TV shows and films. But there's still a sense that we're only hearing surface-level detail from the B1; we want more detail and richness throughout.

Our five-star Samsung UE55KS9000 does a better job at delivering solid, nuanced voices that sound natural and expressive, and can even make Keanu Reeves’s wooden delivery sound reasonably expressive.

At this price, we’re expecting a huge jump up in sound quality. But when the TV sounds better on it own, then you know the soundbar isn’t doing its job properly.

The B1 has a slightly languid presentation that comes to the fore whenever playing music.

Play the DVD of the Talking Heads’ Stop Making Sense concert, and the Phillips struggles to keep tabs on the twanging instruments on stage and the driving rhythm of Girlfriend is Better.

There’s certainly an attempt to keep pace with the rhythm: there's ample bass, but it doesn’t reach too deep or rumble with texture. The edges of notes lack the accuracy and clarity that rivals such as the Q Acoustics Media 4 have.

This spoils the Philips’ ability to render taut, fast-moving rhythms.

We’d recommend staying in Music mode, as the Movie mode stretches the sound out, which, in the Fidelio B1’s case, is not a good thing. The lean, coarse edge is emphasised and takes away any solidity and cohesion that exists in the Music mode.

The Philips Fidelio B1 draws you in with its big, open and wide sound, but does little else beyond that to keep us captivated.

The lack of rhythmic precision and insight means it’s hard to justify at the price.

For £450, we’d expect a performance we prefer far more than the TV’s own speakers. The Fidelio B1 is a great idea, but we hope Philips can execute it better next time.

Or at least make it a whole lot cheaper.