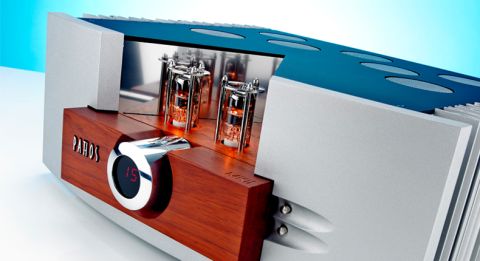 This is a case of having your cake and eating it. Combines aesthetics and great sound

We can’t think of another manufacturer that balances the conflicting demands of aesthetics and performance better than Pathos. This Italian electronics specialist regularly delivers on both counts.

We’re already big fans of the original Lògos. It was first released 12 years ago and has enjoyed a steady stream of upgrades throughout its life.

This Mk II version doesn’t change in appearance at all – why would you, when the outlandish mix of wood, metal and left-field design still looks so stunning?

But the engineers have taken the opportunity to revise its valve-powered preamp stage in a bid to improve its performance.

Its heart remains a pair of ECC83 valves, but the circuit is modified for greater stability and transparency.

The power amplifier section is unchanged; it’s a Class A/B MOSFET design with an output of 110-watts per channel into 8ohms, and double that as impedance halves.

As far as amplifiers are concerned, that doubling of output into 4ohms is ideal behaviour and, at the very least, suggests the Lògos will be happy driving a wide range of speakers.

That certainly proves to be the case.

It produces good volume levels with our reference ATC SCM50s and a pair of Monitor Audio PL100s. This integrated is certainly less fussy than just about any all-valve alternative we’ve tried.

Those Pathos-script heat-sinks along each side aren’t just for show. Given a couple hours of hard use they heat up notably.

It’s not dangerous of course, but does mean that you need to ensure there’s plenty of room for ventilation to prevent heat build-up being an issue.

The other major change in the transformation to Mk II status is the option of having on-board digital-to-analogue conversion circuitry.

You can save £450 off the price we’ve quoted if you leave the digital module out, but we wouldn’t. If, like us, you have a fair few digital sources, you will find the DAC is a good one.

Our only complaint is that there isn’t an optical option alongside the USB and pair of coax – it would be handy to have one.

The amp will accept 24-bit/192kHz music streams through all its digital inputs, though you need to install dedicated Pathos software drivers to get the USB to work.

It’s a simple enough process that only takes a few minutes to complete. Away from the digital inputs the Lògos conforms to the high-end integrated amp norm.

You also get a preamp output – for those who feel the need to bolster the amp’s power – and a set of high-quality speaker terminals.

We’re impressed by Pathos’s build quality – the Lògos is solid and well finished.

We really like the attention given to small details such as the carved ‘Mk II’ on the wooden front section of the amplifier and the rather lovely circular grille holes on the top panel.

While some may feel the overall effect is too showy, we doubt whether anyone could criticise the way it’s made. Just as the looks are a little divisive, we think it will take a while before some people feel totally at home operating the Lògos.

On the surface it’s a simple device, with a couple of front panel buttons, a large volume control and minimalist remote. But the focus on aesthetics has affected usability.

Neither of the front panel buttons – power and input selector – are labelled, which in itself isn’t a huge problem, but couple that with a frustratingly vague action and things become too hit-and-miss for our tastes.

The Lògos’s lovely looking wooden remote isn’t perfect either. It may be well-built and neatly arranged with just six buttons all in a line, but these aren’t marked, so you have to learn their functions.

Given a couple of days this is easily done – but once again we find ourselves annoyed by a lack of precision in use.

Start listening and any misgivings about ergonomics fade quickly. Previously, we haven’t always been great fans of hybrid amplifier designs that mix valve and transistor technologies.

The idea behind such products has always been to combine the fluidity of valves with the grip and power of solid state. In our experience it rarely works out that way.

Usually these designs compromise the innate strengths of both core technologies, resulting in a rather unsatisfying sonic cocktail.

Pathos, in our experience, is one of the few companies to get hybrid designs right on a regular basis, and the Lògos Mk II continues that trend. You can’t go wrong with classic Motown tunes so that’s where we start.

Listening to a range of tracks from The Temptations, Stevie Wonder and Smokey Robinson, we’re struck by the amplifier’s combination of insight, refinement and subtlety.

It really gets to the heart of a track, revealing the emotions involved with ease.

It doesn’t forget to have fun either. There’s plenty of get-up-and go, and a surprising degree of rhythmic precision.

It has us bopping along in quite an undignified manner to songs like Superstition and Papa Was A Rolling Stone – not a pretty sight, admittedly. Moving onto something grander such as Tchaikovsky’s 1812 Overture reveals the Lògos’s muscular side.

Such music highlights the amplifier’s scale and authority, and its composure when pushed hard during the piece’s savage crescendos.

We’re equally impressed by the Pathos’s dynamic punch and its forceful yet textured bass.

The amplifier’s stereo imaging is good too. Instruments are placed with skill and the soundstage is wide and relatively deep.

The staging is nicely layered too and stays stable even when things become busy. Tonally things are a little on the sweet side of neutral, but not enough to skew the overall balance too much.

The sweetening is just enough to soften hard-edged treble a touch, making the Lògos less fussy about playing poor recordings than most alternatives.

It’s easy for audiophiles to underestimate the likes of the Lògos Mk II. At the higher end of the market, products that place a priority on appearance normally struggle with sound quality.

This Lògos Mk II is an exception. Looks, fine sound and excellent build – it has it all.