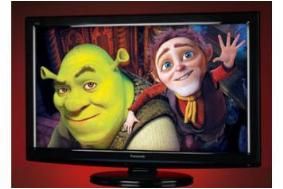 Panasonic's S Series is far from no frills but understandably doesn't feature all the bells and whistles of the more expensive V Series.

It's not just what's inside the box either, this set looking instantly a little tired and sorry for itself without the TX-L37V20's silver finish.

Work your way through the set-up programme – a slightly tweaked version of last year's menu – and you'll notice some of the gaps in specification.

No USB inputs – there are two on the 'V20 – also means no USB recording, a neat feature on the sibling. You'll also have to make do without DLNA streaming and Panasonic's Viera Cast internet TV applications.

It's a different panel, too, the S20 being a standard LCD design without LED backlighting, and claiming a lower contrast ratio, while this set uses Vreal Pro 4 rather than 5 to take care of picture processing.

Off-air pictures are decent enough, though there's a little noise compared with the best here and images could be drawn a little sharper.

Notably, this set wouldn't send Dolby Digital 5.1 sound via its optical out from HD channels, offering up linear PCM stereo only. Read about this issue in greater depth on our website.

Switch to Blu-ray using one of the three HDMI inputs and while the picture in isolation is perfectly watchable, up against the best it does give a fair bit away. Colours are rich and dynamic with good, deep black levels but the palette doesn't have the breadth offered elsewhere.

It's more of the same with DVD, motion unable to deliver the seamless pans available elsewhere and edges often not drawn that sharply.

Sonically it's competent, showing detail and authority, but with better-featured, better-performing sets in close price proximity, this one doesn't do enough to fight its way up the shortlist.