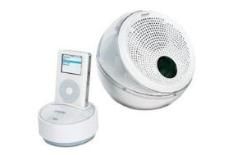 The wireless feature is a neat touch, but the iBall's core function – sounding good – just isn’t there

Aimed at iPod owners, the iBall is – in theory – a fine proposition. You get a receiver with built-in speakers, plus a docking station/wireless transmitter. That's right, this funky-looking system operates without wires. Simply plug your iPod into the dock, and tunes fire across to the speaker unit located up to 30m away.

The receiver uses six C-cell batteries that are good for around six hours of wireless use. You can also power it via the mains. Control buttons on the speaker ball and a basic, backlit display allow you to control your iPod without getting up.

The chunky dock comes with a selection of different iPod adapters, while one for a Shuffle costs £6. Cradles for the latest iPods and nano are also available.

Fully featured
Connection-wise, the dock has an auxiliary input and output, plus an iPod socket for hooking up to your computer's iTunes. There's even an S-Video output to send photos or video to a display.

This would be all fine and dandy, if only the performance wasn't so weak. Music sounds muddled and insubstantial: the Jackson 5's ABC is a mish-mash of vocals and instruments, with little separation or clarity. Bass has been pumped up to compensate for the lack of detail.

The iBall is a fine concept, and the wireless feature works very well, but for £200 you can get a speaker system that kicks this well into touch.