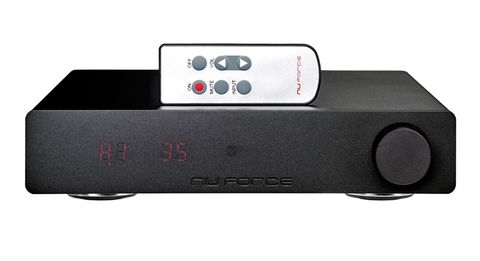 It may suit some, but the DDA-120 can’t compete with similarly priced rivals on absolute sonic ability

The NuForce DDA-120 is a neat looking offering from the Californian hi-fi company purchased towards the end of 2014 by projector giant Optoma.

An integrated stereo amplifier and digital-to-analogue converter in one nicely finished, discreet aluminium box, the DDA-120 will accept both digital and analogue signals to act as a hub for your digital music.

When you consider the diminutive size of its case, the DDA-120 will accept an impressive number of sources: two digital optical inputs jostle for position alongside one coaxial, a USB and an ‘expansion slot’ intended for the bundled NuForce BTR-01 Bluetooth dongle.

To go with those five digital inputs, the DDA-120 also has one set of RCA analogue inputs for any old-school legacy kit you may want to use in your system. The neatly laid out, if inevitably rather packed, back panel is also home to the stereo speaker outputs and the power socket and switch.

To round off the package there is a small, plastic remote control that, frankly, is not in keeping with the £600 price or the standard of finish of the DDA-120 itself.

In contrast to that cluttered rear is the rather stark-looking front. At first glance, it’s a plain sheet of metal with a single knob adorning the right-hand side. That knob acts as the on/off switch, input select and volume control. It’s nicely machined, and quite in keeping with the money NuForce is asking for the DDA-120.

On closer inspection, things are not quite as obvious as they first appear. The front panel has a display that shows input selected and volume levels. It’s all very understated – almost too understated: the display can be awkward to read from an angle.

This box will sit as the hub of a stereo system without taking up too much shelf space, and all the while able to handle an impressive number of sources, whether they be from a streamer, smartphone, TV or CD player – or even a turntable.

After leaving the NuForce to run in for a weekend, we connect the DDA-120 to our Naim streamer and a pair of Q Acoustics Concept 20 speakers. The unit will handle files up to 24-bit/96kHz, so we get stuck in to some high-resolution audio.

The midrange in particular stands out. Clear, precise vocals stand forward in the mix, and this unit leans a touch to the mid and upper registers, favouring them over low bass.

The treble can lean towards brightness, so you should take care with partnering speakers to prevent this from entering into the realms of stridency – the Concept 20s are good partners in that respect.

That care having been taken, there is no denying the precision of the NuForce. Notes start and stop crisply, and instruments are clearly placed in the soundstage.

It’s the lower registers that concern us, however. The bass is there, as fast-moving as the rest of the sound, but there’s no real depth to notes – it’s all a bit insubstantial.

It’s a little lacklustre dynamically as well, the shift between loud and quiet passages being less dramatic than we’d expect. The same sonic characteristics are true of the NuForce no matter which input we use.

This lack of welly becomes all the more apparent when we compare the DDA-120 to the Cambridge Audio CXA60 (£500). While it is a much bigger unit, the Cambridge offers similar specification and a far more well-rounded and enjoyable sound.

The 120’s supplied BTR-01 Bluetooth dongle accepts the higher-quality apt-X codec and is easy to set up – we’re sending music from our phone and tablet in seconds.

The NuForce DDA-120 has a lot going for it. It’s a neat package, nicely built, and with a host of connections.

We just can’t ignore the fact that your £600 (indeed less) will buy you better, more involving and enjoyable sound elsewhere.

Read all our Optoma reviews and news