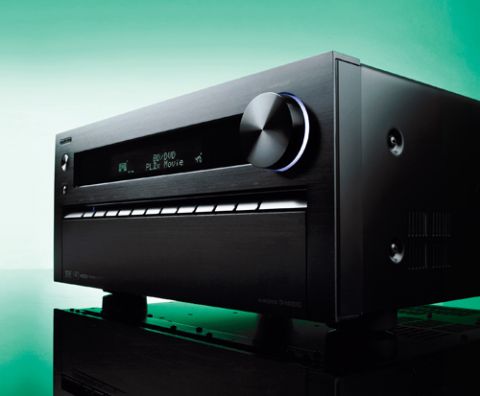 Japanese company Onkyo has a solid history in this market. It was the first to release a THX-certified AV receiver all the way back in 1994, and has picked up plenty of Awards over the years. We tested the TX-NR1010 at this price in our December 2012 issue, but that four-star product is now slightly cheaper, bringing the TX-NR3010 into sight.

It’s very much its brother’s brother, keeping much of the spec and a similar sonic character. You’re paying mainly for the extra channels: this is a 9.2-channel AV receiver compared with the 7.2-channel NR1010.

There’s an 11.4-channel analogue output too, and the company’s differential DAC mode that claims to double the processing power for up to 5.1 channels rather than just the front two.

You’ll get the same 160W per channel (into 8 ohms) and the same thorough coverage of socketry and features: 9/2 HDMI in/outs, two USB inputs (the front one can take a digital connection from iDevices), support for up to three zones of music and networking (wireless and bluetooth dongles are optional).

Get hooked up and you’ll find DLNA streaming of FLAC and Apple Lossless files, as well as integrated Spotify, Last.fm and internet radio. Onkyo now has free remote control apps for Android and iOS, which work nicely – albeit with a slight delay.

It’s still far better for entering text, though, and has nice features such as the ability to keep the app on for quick access even from your phone’s standby mode. InstaPrevue, which shows live thumbnails from connected sources to help you select the right input, is also a neat touch.

The latest THX and ISF certification is on hand for video and audio optimisation, there’s 4K video upscaling, support for 3D pass-through, height and width channels and the latest Audyssey EQ calibration. The NR3010 certainly doesn’t lack badges and features.

It won’t be found wanting when it comes to power, either. Like the NR1010 before it, this Onkyo has no problem delivering solid, powerful hits, with good dynamics built on weighty, full bass. Treble is kept under control, with the crashes of broken glass and attack of gun shots in The Avengers sounding clear but not harsh.

The opening car chase scene in the film throws plenty of sounds in the air and the TX-NR3010 struggles at times to keep a rigid grip on the action, losing a little focus (and our attention a touch) as a result. Ultimately it’s an issue of detail: the Onkyo doesn’t quite match the best for insight.

This is made apparent listening to music in stereo, too, where voices miss a layer of subtlety and tracks can sound a little two-dimensional.

Power and features aren’t a problem for the Onkyo TX-NR3010, but it’s lacking that last layer of quality against the very best.