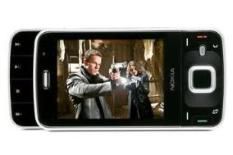 The N96 is a very capable phone that majors in musicality, just not video playback

Nokia has a knack of producing fine multimedia phones. And on paper, the N96 has the form and function to give its peers a serious run for their money.

Like its predecessor, the N95, this handset boasts a dual-sliding form factor. Slide the underneath of the handset one way to reveal a numerical keypad and the other to show off a control pad for the phone's media player.

The screen is just 2.8in but unlike many rivals it isn't a touchscreen. However, don't let this put you off. The only aspect of the design we're not sure about is the cheap plastic feel of the handset – not something we'd expect from one of Nokia's top models.

Expandable 16GB of memory
The phone comes with a capacious 16GB internal memory that can be expanded with a MicroSD card. There's also wi-fi and HSDPA functionality, an FM radio, A2DP stereo Bluetooth connectivity, a 3.5mm headphone jack, plus an integrated 5MP camera and built-in GPS.

There's even a small integrated stand on the back of the handset to prop it up when you're watching video. The battery should be good for five hours of video playback and up to 14 hours where music is concerned.

The N96 provides easy access to Nokia's Music Store and features a DVB-H receiver for watching mobile digital TV – great for countries that can receive these broadcasts, useless if you live in the UK.

In the box you'll find a disc containing Nokia's NSeries PC Suite. This software includes Video and Music Manager; you can drag and drop files from your PC to the phone or you can get the software to search your computer and convert the files before transferring them.

Disappointing screen, good sound
The screen, however, is a disappointment. It lacks the vibrancy of the BlackBerry Storm and can't muster the detail of the iPhone.

Where the N96 does excel, though, is with sound quality. The supplied headphones are among the best we've tested with a phone, and they're capable of digging up decent detail.

Partner the N96 with an upgraded set of earbuds and the phone's true strengths are revealed. You're treated to a detailed, transparent sound. Notes are well-defined and music flows along naturally and rhythmically.

The Nokia sounds better than the BlackBerry Storm and not light-years away from the Apple iPhone. It might not have the looks of its rivals, but there's much to be said for the N96's conventional design and quality sound.