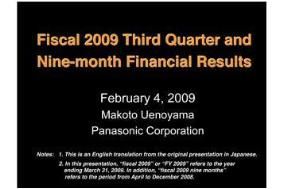 And that's expected to lead to up to 15,000 job-losses, half in Japan and the rest across the world, meaning a reduction of almost 5 per cent of its global workforce.

Worries at Welsh plants
That's already causing worries at the company's facilities in Wales, where Panasonic employs 1000 people in Cardiff in electronics manufacture and its European R&D centre, and a further 500 in Newport making communications equipment. The company closed its Port Talbot plant a year and a half ago.

The latest figures see Panasonic's sales down 20% in the three-months to the end of 2008, and profitablity was further hit by the continued appreciation of the Japanese Yen against currencies such as the Pound, Dollar and Euro.

As a result, the company suffered a net loss of 63bn Yen for the third quarter, against a 115bn Yen net income for the same period in 2007.

And for the nine months from April to December, it showed a loss of almost 66bn Yen, against an income of 220bn Yen a year before.

TV sales holding up
Flat-panel TV sales are holding up well, although the continued downward pressure on prices and the strength of the Yen are doing the company no favours, and overall sales in the company's AVC division, which covers home and automotive entertainment equipment, were down 7 per cent.

However, there were even greater falls in the sales of components, and equipment such as the company's surface-mounting machines, used to load circuitboards.

As a result, the company has made a drastic revision of its forecast financial results for the 2008-9 financial year. Last November it expected to finish the year with a net income of 30bn Yen, or about £235m; now it's expecting a loss of 380bn Yen, or around £3bn.

UPDATE
This afternoon we received the following statement from Panasonic UK:

"By the end of March 2010, we expect that the total size of employee reduction worldwide may reach 15,000 of which about half the reduction may come from Japan and the rest from outside of Japan.

"Regarding factory closures, we can only mention names of the sites, which we have announced already and we do not disclose any further information. Although we mention these figures, it is not our priority to reduce headcount or manufacturing sites, but our ultimate goal is always to strengthen our business operation and management structure. Therefore, we always go through constant review of the optimal allocation of resources.

"At Panasonic UK Limited we have had a successful year. We have increased our market share and shown double digit growth in declining market conditions. This is due to the sales success of our Viera Freesat high-definition TVS, Blu-ray products, HD camcorders and Lumix digital still cameras.

"We are also planning to launch white goods (washing machines and fridge freezers) in the UK and Europe in February, which will create more opportunities in the coming year."