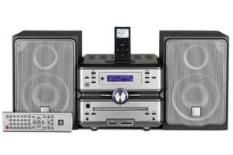 Inevitably compromised considering the price, but still loads for the money

Let's make one thing clear: in absolute terms, you won't find a sonically flawless system anywhere for £140. Or to put it another way: this system is a highly affordable compromise. However, given that it includes CD replay, iPod-docking and playback, plus a DAB tuner as well as FM – not to mention inputs for USB, SD card and (for good measure ) 3.5mm jacks, all for meagre price – it's a pretty attractive compromise, too.

The system is reasonably well built. It's designed to look like two separate units from a distance, but is actually just a single box, with a well-positioned central volume control and a set of buttons that are well laid out, even if they feel cheap and plasticky.

Sound is solidly satisfying
Performance is more than acceptable for the money. CD replay is fairly solid, cohesive, well-honed and detailed, while music from a docked iPod also sounds good, especially if your tunes are encoded in something more weighty like the Apple Lossless format.

DAB performance is also very decent, though as with all formats the MoS tends to harden up the higher you push the volume. Push it really hard, and (we give you fair warning) your ears risk bleed.

In a nutshell, this is no sonic star, but it's solid value for money.