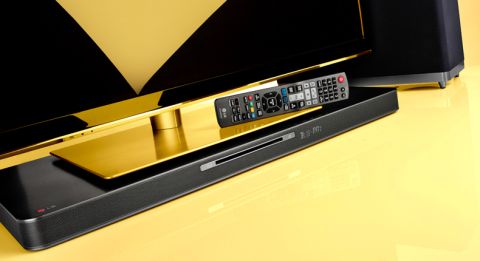 Plenty of exciting features here, but the sound quality isn’t up to standard

LG may have just reinvented the home-cinema-in-a-box.

The LG LAB540 SoundPlate isn’t just a soundbase – it’s got speakers, a Blu-ray player, smart features (including BBC iPlayer, Netflix, Now TV, Spotify etc), wi-fi connectivity, Bluetooth and 4K upscaling, all crammed inside one slim and neatly packaged frame. Add in the wireless active subwoofer and you’ve got yourself a comprehensive yet tidy home cinema system for £500.

Great idea this, but we’d be a lot more excited if the SoundPlate delivered a more convincing sonic performance.

Good points first: the LAB540 sounds big, and there’s plenty of power behind that strong, large-scale sound. It fills a room – ideal for being immersed in the latest superhero Blu-ray film – and packs a weighty punch compared with your average flatscreen telly.

Detail level is decent, although it couldn’t hurt to dig even deeper to flesh out nuances in voices or to bring out the finer subtleties of Pacific Rim’s epic score.

It’s just a shame that it’s a bit boomy, and sounds completely disconnected from the rest of the sound.

The top end has a bright edge that is at odds with the big, booming bass, and in between their struggle for dominance the midrange is ignored and left to its own devices.

Actor’s voices all sound the same – flat and nasal – with little emotion or inflection coming through. Even with the subwoofer-level optimised, the impact of things hitting metal (or, indeed, metal hitting things) in Pacific Rim or RoboCop doesn’t have enough to satisfy us.

We are left wanting a more cohesive and natural sound. On the plus side, we’ve got no complaints about the LG’s Blu-ray picture.

It’s worth noting, however, that there’s no scope to tweak the picture quality on the LG LAB540; you’ll have to make do with your TV’s picture settings.

The SoundPlate’s slim design will appeal to the house-proud. It’s neat, the LCD display next to the disc drive makes it easy to use, and there are no trailing cables to deal with since the subwoofer connects wirelessly.

The remote, too, is well conceived – a substantial affair that’s responsive and instinctive to use. You’ve got two options for connecting to your TV: HDMI or optical.

There’s a USB port for playing stored media from a flash drive, and an HDMI output too. You also get wired ethernet, Bluetooth and wi-fi connecting options.

The home-cinema-in-a-soundbase idea is a brilliant one, but LG needs to focus more on getting the sound quality right rather than adding all those extra features to tantalise us.

While it’s a neat solution and a big improvement over LG’s first attempt, £500 is a steep price to pay for a soundbase whose sound isn’t wholly convincing.