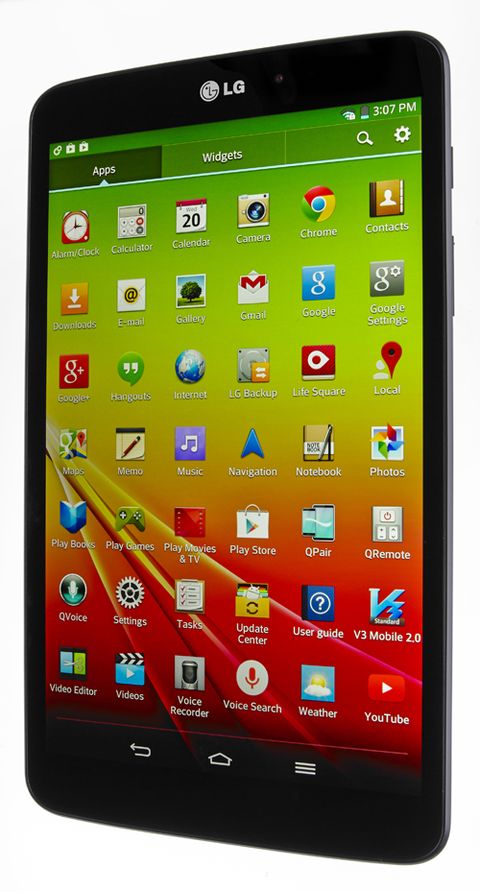 The LG G Pad is a great tablet with two problems – its price and its timing.

Launched in the UK in mid-October 2013, it had just a week to lap up its promising position in the market before the Apple iPad Mini with Retina Display launched and made its proposition feel somewhat shaky.

LG made the sensible decision and stayed clear of the well-populated 7in tablet market, instead opting to fight in the slightly less crowded 8in arena.

Its screen is actually a rather unique 8.3in, but the competition for the G Pad lies in the 8in-and-below sector rather than full-sized devices.

First impressions are good. It’s a mostly aluminium chassis, with a bright, 1920 x 1200-pixel Full HD screen (a rarity at this screen size until recently).

Compared with the Samsung Galaxy Note 8.0, text is sharper and better defined, and images appear crisper and more detailed – it’s hard to recommend anything less than this resolution when you compare the differences side by side.

Battery life isn’t market leading but certainly didn’t leave us wanting, offering around seven hours of non-stop movie watching, but much nearer the nine-hour mark for a mixture of browsing, movies and music.

You might find yourself out of battery by the end of a long-haul flight, but for day-to-day use it will see you through your daily commute and an evening of browsing.

Video benefits from all those extra pixels. There’s plenty of detail to get stuck into, not to mention a handy 16:9 aspect ratio for widescreen movies. Subtle detail is handled better on the new iPad Mini, but that’s to be expected with more pixels to play with.

Colours on the G Pad are rich and warm in their presentation, motion is smooth (even on content streamed via wi-fi), and whites are really powerful, with enough punch to stand out against an already bright, vivid background.

Blacks couldn’t get much deeper, but there is a loss of finer shadow detail compared with the Mini.

The G Pad is rocking a Snapdragon 600 processor, which is also found inside the HTC One. It’s powerful enough, but feels somewhat dated considering the newer Snapdragon 800 crops up in the Samsung Galaxy Note 3 and even this tablet’s smartphone sibling, the LG G2.

This means that while you’ll be greeted with a largely stutter-free performance, transitions between apps and menus aren’t always as snappy as its rivals.

It’s far from being slow, but it isn’t the fastest performer out there either. The G2 certainly takes it for out-and-out speed and responsiveness.

As far as storage goes, there’s 16GB for you to fill, with a microSD card slot for up to 64GB of expansion.

Musically, the G Pad falls behind its HD audio-compatible smartphone sibling, and offers a rather tired-sounding presentation that lacks any real sense of get-up-and-go.

It’s nicely judged and well balanced, so there’s no harsh edge to the treble or booming bass, but it’s missing a sense of attack that leaves lively tunes feeling a little lacklustre. Movies sound much better: dialogue is clear and takes centre stage.

Like its rival Samsung, LG has gone for a rather garish implementation of Android 4.2.2. Which we can’t say we care much for it. The operating system comes with a suite of LG apps and features built-in, which we found to be of varying usefulness.

QSlide lets you have a number of apps open in smaller screens – for watching video while browsing the web, for example – while QRemote means the G Pad can act as a remote control for your TV and set-top box.

QPair gives you the ability to view text messages and incoming phone calls from a paired Android smartphone via Bluetooth – LG phones get the most functionality from the app, naturally.

The G2’s KnockOn feature, which wakes up the tablet from sleep with a double tap, has also found its way to the G Pad. It’s a little patchy in use, if we’re honest, particularly as it takes just long enough to wake for you to wonder if your taps have actually been registered. Sometimes hitting the home button is just as easy.

Our time with the LG G Pad’s 5MP camera wasn’t a fantastic experience, but then tablet cameras are rarely stellar.

Colours are reproduced fairly accurately but the touch-to-focus feature often failed, so we were left with blurry snaps that lacked detail. Whites had a tendency to be overexposed in bright light, too.

There really is a lot to like about the LG G Pad, with its great screen, expandable memory and impressive design and build showing many of its 8in rivals how it’s done.

However, some of its internal specs are a little long in the tooth for launching this late in 2013, and that rubs off on its performance when it comes to head-to-head comparisons.

This we could deal with, if it weren’t for the £260 price-tag. It’s a halfway house that leaves it stuck between the excellent Google Nexus 7 and superb Apple iPad Mini with Retina Display.

When you can get better for less, it’s hard to understand how the G Pad fits into the market.

This is the only premium 8in Android alternative to the Mini, though. And a price drop to below £250 could be all that’s needed to make this tablet a success.