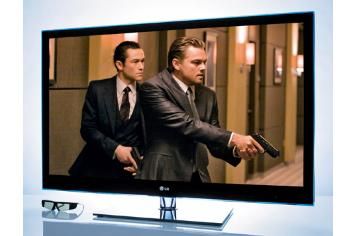 At worst competent, and at best very good indeed, the LG’s persuasive in the extreme

LG has a knack of turning out TVs that look (in the showroom and on paper, at least) more expensive than they are. But unlike the staunchly ordinary 47LX6900, this 50PX990 has the performance to make good on its specification.

Easy to use, with great pictures
This is a smoothly good-looking plasma (we've become better disposed towards LG's ‘single layer' design since it stopped calling it ‘frameless'), and it has all the functionality you could expect at the price.

600Hz processing, THX certification (there are two THX picture presets) and Freeview HD reception are all on board, and the package includes a single pair of 3D specs, and a wireless dongle for painless connection to your network.

Also included are a pair of remotes (the bigger one isn't too bad in terms of useability and the little one just has the most common functions). On-screen menus are big and bold, and the LG's simple to get the best from. What's more, its best is really rather good.

Watch our video review of this set

TV reception isn't the last word in composure – it's a little coarse and more prone to edge-crawl than we'd like – but the PX990 gives an early demonstration of its fine facility with colour and contrast. Black levels impress in both depth and detail, and detail levels in general are on the generous side.

The same convincingly natural colour palette is on show when the LG upscales a DVD of Juno, and it's joined by a welcome refinement to skin-textures and a distinct smoothing of edges.

Noise is suppressed well, even in complicated or pattern-heavy scenes, and the PX990 confidently combines clean whites and deep, information-packed blacks.

Makes the most of Blu-ray pictures
Motion is competently managed, too, with only the slowest, most lingering panning shots creating any discomfort. Blu-ray pictures, unsurprisingly, make the most of the LG's strengths while minimising the impact of its relative weaknesses.

Its facility with contrast, colour and black detail remains striking, while motion becomes ever more secure (even if it's not absolutely flawless: complex near-field movement can find the set working hard to keep up).

Throughout, the sound this screen serves up is acceptably judged, with its lack of top-end shrillness compensating for its complete absence of substance.

The LG's 3D glasses are either happily lightweight or routinely flimsy, depending on your perception, but with them in place and some 3D content on display, the PX990's an absorbing watch.

Cross-talk, though by no means eradicated, is less intrusive than many rivals can manage, and while images are a little darker and a little ruddier than their 2D equivalents, there's still a pleasing level of detail displayed.

If your requirements are for a big, aggressively priced 3D TV, until now your choice pretty much boiled down to the Award-winning Samsung PS50C6900. At a stroke, LG has doubled the length of your shortlist.