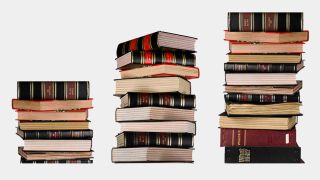 In 2016 What Hi-Fi? celebrated its 40th anniversary, and to mark the occasion we picked our 40 most influential products from those four decades. We started with the year the publication was born (1976), listing the best hi-fi of the 1970s.

And now we continue our celebratory journey through the '80s, '90s, noughties and 2010s in the articles you'll see below. A new product is added to our Hall of Fame every year at the What Hi-Fi? Awards, so when this year's rolls around we'll be starting our 2020s list too...

The likes of Pro-Ject may dominate the budget turntable market today, but back in the 1980s it was Dual with the CS505.

It was a pretty sophisticated deck with a proper suspended sub-chassis - which made it less sensitive to positioning - and a degree of automation in operation.

Later versions looked less budget-orientated with the arrival of some smart wooden plinths, but the oily bits stayed pretty much the same.

This was a tidy, well-balanced performer. It dug up a decent amount of detail and delivered it in an entertaining way.

The Dual delivered satisfying results without putting too much of a strain on the entry-level kit it was usually partnered with. Oddly enough, that’s the quality that made it so good in a budget context.

Back in 1982, no one would have believed the Wharfedale Diamond would dominate the budget-speaker market for generations to come.

At just 24cm high, the originals were tiny but delivered a huge amount of bass - and had a rolled-off, smooth tonal balance. The Diamonds were much cheaper than their competition too, costing £65 a pair while the rest hovered closer to £100.

Subsequent generations saw improved tweeters and better finishes, and the current Diamond 220 speakers are arguably the best Diamonds ever. Yet for that touch of magic that’s rare in hi-fi, it’s the originals we hanker after.

The Gyrodec is as much a piece of engineering art as it is a turntable. Still available today, this player has hardly changed in appearance since it first appeared.

It hasn’t needed to, because Michell got the engineering spot-on right from the start. This is a beautifully made deck, built to the kind of standard that routinely embarrassed rivals at double the money.

If you like Meccano, you’ll love putting this deck together – it arrives in bits. But the clear instructions and Michell’s logical approach to design mean it’s a breeze to construct.

Once up and running it sounds detailed, expressive and graceful. Others may prioritise rhythm or dynamic contrast but, even today, the Gyrodec remains what it has always been: a fabulous buy.

This is the product that started it all for Audiolab. It arrived out of nowhere, knocked the A&R Cambridge A60 off its perch and set the standard for midrange amplifiers for years to come.

For the time it was superbly made, making most rivals look like they’d been knocked up in a shed. The 8000A was also well equipped, featuring tone controls, a headphone output and a decent phono stage.

It also had plenty of grunt and could drive most price-compatible speakers with ease, though the sound quality split opinion at the time. There was no denying its wide-ranging dynamics, insight and tonal evenness, but some wanted greater rhythmic subtlety.

But back in the 80s, this was a fit-and-forget amplifier – an easy recommendation that pleased most of the people most of the time.

Cyrus started off as the electronics arm of speaker specialist Mission. The Cyrus One and Cyrus Two - its more powerful brother - were the company’s first products. Early examples had a plastic case to eliminate the distortion effects of eddy current, but later versions switched to a cast metal case that was astonishingly sophisticated for a budget amp.

This was a purist amp, designed with maximum resolution as a priority. Provided you were in basic sympathy with its lean, lightweight presentation – power output was only 25W per channel – this amplifier stunned with its agility and dynamic expression. When it came to insight and uncovering the finest of details, it could rival most amps costing twice as much.

This is a classic Naim high-end combination, which formed the heart of thousands of hi-fi systems in the 1980s.

It came in three bits: the 32 preamp – a flexible purist design – coupled to a high-grade dedicated power supply and the now-legendary 250 stereo power amp. Together, this trio could deliver drama and delicacy in impressive portions.

By current standards the sound could have been more transparent and open, but at the time little could match this combination’s dynamic punch, its powers of organisation or its stupendous rhythmic drive.

Back then, Naim had a close relationship with Linn - so this amp was often found partnered with a Linn LP12 turntable used as the source.

Welcome to the only cassette deck on our list. We could have gone for one of the top-end models from Nakamichi and justified the choice quite easily, but the Denon is just more real-world – and more of a What Hi-fi? product.

It cost around £350, and packed in just about every piece of cassette tech you can think of bar auto-reverse. All the Dolbys are here, from the noise reduction systems B and C right the way through to HX Pro, which added an extra dose of openness and detail to the sound of magnetic tape.

This was a three-headed machine, which allowed the listener to hear the recording while it was being made. Being one of Denon’s premium products, it featured a tuning system that optimised the performance with the tape being used.

The performance was excellent, with lots of detail, good speed stability and strong dynamics.

The original AE1s sent shockwaves through the premium speaker market in the mid-1980s. It was a small standmounter, barely larger than a shoebox, but delivered staggering levels of detail and dynamics.

They were exotically engineered, with an all-metal drive unit configuration (rare for the time) and a cabinet lined with plaster to reduce internal standing waves and improve damping. The two small front-facing reflex ports looked pretty cool too.

These speakers were demanding of system and supports. They worked best on their dedicated stands, which cost half as much as the speakers themselves, and only shone with high quality, muscular amplifiers.

Get a pair singing though, and they will impress even today.

10 strange and striking hi-fi adverts from the 1980s