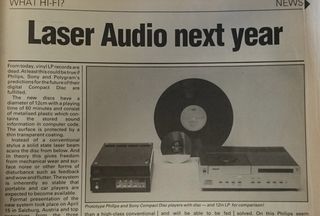 "From today, vinyl LP records are dead," is how we started the What Hi-Fi? news article on the birth of the CD in the July 1981 issue of the magazine.

And while for a period over the last 30+ years there may have been some truth in that statement, the resurgence of vinyl over the last few years, shows there's still plenty of life in vinyl.

Despite our deliberately controversial opening line, we were quick to sound a note of caution around the imminent launch of CD - predicting the rise and fall of formats was already an obvious potential banana skin back then.

"At least this could be true," the article continued, "if Philips, Sony and Polygram's predictions for the future of their digital Compact Disc are fulfilled."

There was further proof that the success of the CD was no foregone conclusion later in the article, when we said: "The transitional period from conventional (vinyl) to compact discs is however expected to last until the end of the next decade - the year 2000!" A year which appears to have sounded like a futuristic event that could never happen back in 1981.

CDs actually overtook vinyl in terms of sales in the late 80s, though the two have existed merrily alongside each other for many years since.

Back in 1981, there was plenty of excitement around these small, shiny new discs, which promised to hold 60 minutes of music on a 12cm diameter disc.

CDs didn't just mean "freedom from mechanical wear and surface noise or other forms of disturbance such as feedback and wow and flutter". The technology also meant a system "inherently so stable that portable and car players are expected to become available". Well, we were right about that.

MORE: That Was Then... Sony Walkman

It won't come as a surprise to anyone to hear the new format was due to come with a price premium, with CDs tipped to be "around 30 per cent more than normal LPs" and disc players set to cost the same as high-end record players. If you've been following the news around Ultra HD Blu-ray, this will all sound very familiar.

And again, as we've seen with HD, 3D, 4K, high-res audio and just about any other tech advancement in recent years; content is crucial. "Two to three hundred titles" were due to be available for the launch of CD which, following the first official unveiling on 15th April, 1981, in Salzburg, Austria, was due to happen by the end of 1982. (The first players did indeed go on sale in October 1982.)

But would CD be a success? Philips was convinced (even if a few of the original manufacturers involved are no longer with us): "Since the system's original presentation by Philips in the spring of 1979 and subsequent co-development by Philips and Sony, other firms, such as Akai, Bang & Olufsen, Crown, Dual, Grundig, Matsushita, Nippon Columbia and Revox, have joined forces, thus making Compact Disc for all intents and purposes the new industrial standard in digital audio discs."

And we guess, they were right. The less said about the "death of vinyl", the better.

You can read more about the birth of the compact disc in our history of the CD, which was originally published in on the 30th anniversary back in 2012.