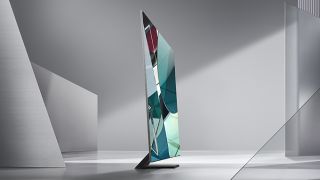 8K TV is everywhere at CES 2020. We’re only a few hours into the show but based on the early news and first press conferences, there’s going to be a whole heap of 8K talk this year.

Before the show had even started details emerged of the LG 8K TV line-up – and it was telling that it was details on the 8K TVs that the company decided to announce first. Boldly claiming to be "the company delivering the Real 8K experience", LG announced it will reveal eight brand-new 8K TVs at CES 2020, from 65 to 88 inches.

Sony's 2020 TV range wasn’t released but rather leaked ahead of the official announcement at CES, and again it was all about the 8K ZH8 TV that promises to lead the family.

Samsung then kick-started the show with a humdinger of a press conference and it was clear in amongst the super-size MicroLED screens that its the 8K TVs that are the company’s new flagship focus for this year, with the top-of-the-range Q950TS bezel-less TV (pictured, top) hogging the limelight.

Panasonic’s press conference is still to come, but it’s not just the big global players getting in on 8K. Chinese brands Skyworth and Konka (huge in China, now announcing their plans to go global) also have 8K TVs to show-off at CES, and we could yet see more from the likes of Hisense and TCL.

So it’s fair to say 8K is now front and centre in the TV market. They’re available from a range of manufactures, at a wider range of screen sizes, and, inevitably, at slightly more affordable prices than last year's select models.

But nevertheless, even the early adopters among us are well within our rights to be rolling our eyes. For it is very early days for 8K TV. In fact, for many of us, it remains early days for 4K, with TVs only reaching mainstream sizes and prices relatively recently and the amount of 4K content only now starting to climb in core markets such as Japan, the UK and US.

And of course, as even the most casual observers would be quick to point out, there is the matter of the most obvious issue: there is next to no 8K content available. Anywhere. So while you could have bought an 8K TV in 2019, and, by the looks of it, you will be heartily encouraged to buy from a much larger range of 8K TVs in 2020, you’re not going to have any 8K content to watch on it. That’s the obvious, and quite typical, problem that comes around every time new video tech is launched.

But this obvious issue, leads to something that's perhaps not as widely known. And that's the fact that not only would you be watching 4K or HD resolution content on your 8K TV for the foreseeable future, this lower resolution content may well look worse on your new 8K TV than it would on a 4K TV. And that's not ideal.

When we compared the flagship 4K and 8K TVs from Samsung last year, we were blown away by the snippets of 8K content we were treated to, but we preferred the performance of 4K video on the 4K screen. As we said in our review of the 8K Q950R, “The problem is that when feeding the same content into both the Q950R and Q90R, we’re still too often drawn to the Q90R’s delivery. Surprisingly, this has less to do with resolution than with colour balance and black performance, but it’s an issue all the same.” Again – not ideal.

And it’s not a Samsung issue, it’s an upscaling issue. An 8K screen has a huge number of extra pixels to fill when dealing with 4K content, with 75% of the picture having to be produced by the TV’s upscaler. You could rightly say it’s miraculous that 4K video looks anywhere near as good on an 8K TV as on a 4K screen. But if you’re spending serious money on an 8K TV, that will be scant consolation.

The good news is that TV manufacturers are well aware of the issue and are focusing on improving the upscaling technology in 8K TVs as a result. This year’s just-announced Samsung 8K TVs feature the new Quantum Processor 8K which uses machine learning to analyse and identify the characteristics of individual pixels, and then “restore different elements of the image to create a pristine 8K picture, regardless of the content source”. We expect to hear about similar processing developments to aid upscaling from other TV brands, too.

Furthermore, TVs are now able to be updated and upgraded over time by firmware updates, meaning any future processing updates can in theory be brought to older sets purchased by early-adopters.

The consumer electronics market loves to sell the next big thing as soon as possible to tech-hungry enthusiasts but despite the hype, we think it really does seem too early for 8K TV to be a worthwhile proposition. The lack of 8K content, naturally, and the potential pitfall of 4K video performance, have us very much in the wait and see camp for now.

Nevertheless, with the 8K bandwagon set to gain momentum at a rapid pace, we certainly can’t wait to see the 2020 8K TVs in action to see if they can change our minds. Not least as that bezel-less Samsung 8K QLED really does look stunning...