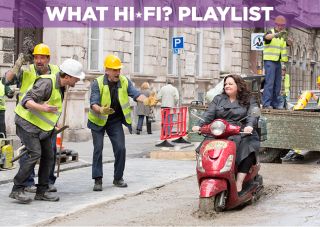 Melissa McCarthy and director Paul Feig reunite for a pastiche of spy films in Spy and the results are... slightly disappointing.

Though McCarthy and Feig work well together, Spy - like The Heat before it - undercooks its premise with some laboured jokes and a few weak action scenes.

Melissa McCarthy is Susan Cooper, a desk-bound CIA analyst who manages operations for agents when they're in the field. When agent Bradley Fine (Jude Law playing Bond as an American, but cheesier) is compromised during a covert operation, she volunteers to go undercover, complete his mission and locate the whereabouts of a weapon of mass destruction. So far, so Bond.

Without a doubt, the highlight is McCarthy. The role of Cooper gives her something more than the bumbling idiots she's played recently. Here, she showcases not just her comedy muscles but her action chops too.

We're not expecting Bond levels of action and though some stunts clearly feature a stunt performer, when McCarthy's on screen she shows she can pull it off.

Cooper's story is one we've seen (so) many times before - an unassuming agent whose ability and looks are constantly questioned and doubted. But once she, and the film, overcome those labels McCarthy kicks down the door and unleashes her (profane) comic talents. If she's not punching people, she's verbally dismantling anyone within earshot. She's a delight when the film's focus is on her.

The film has its sights set on being a comedy first; action scenes lack excitement and never really getting the blood pumping.

So what about the comedy? It's solid but also repetitive and uneven. Scatological humour is the highlight of a few unimaginative jokes, Feig finding relief amongst haemorrhoids and a dead man farting. High-brow it's not, nor does it need to be – but it could do with being fresher.

Statham, dropping the faux-American accent and going full gruff Brit, plays against type as incompetent, bumbling CIA agent Rick Ford who keeps going rogue. His character initially doesn't work, his introduction not just unfunny but aggressively unfunny, as Statham spins his wheels, rooted to the spot. The character's shtick comes close to outstaying its welcome after just one scene, but thankfully he gets better.

Others fare less well. Morena Baccarin's performance must have ended up on the cutting room floor as she's wasted, and Alison Janney plays her CIA head strict and straight but it never quite gels.

Rose Byrne's villainess Rayna Boyanov is another character that doesn't click. Despite the bouffant hair and daddy issues, Byrne lacks a threat and her character is not particularly interesting. Miranda Hart plays… well, a plummy Brit CIA agent who panics a lot. She's okay.

If you want to be entertained for two hours then Spy will do exactly that, but despite McCarthy's spirited performance it doesn't deliver consistent returns.

But the comedy is solid for the most part and that's what people will see Spy for, a slice of disposable entertainment.

It's silly – sometimes in a good way, sometimes not – and at times it makes absolutely no sense whatsoever. However, it has Melissa McCarthy on top form and that's reason enough to watch.