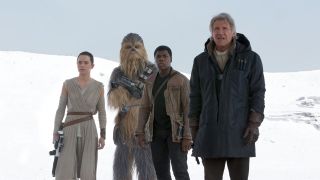 What makes a great movie franchise? The cast, characters and storylines? The merchandise? The cuddly toys? Or should it solely come down to cold hard cash and box office receipts?

Everyone will have an opinion, which is why our list is a simple serving suggestion of some of the best movie franchises to hit the silver screen. Expect superheroes, secret agents, dastardly villains and intrepid explorers across worlds of sci-fi, action and fantasy fiction. Many boast outrageous special effects and soundtracks that will thrive in any home cinema setting and be worth the rental (or purchase) fee alone.

To keep things fair all of the franchises we've chosen consist of three films or more. Most of them we think you’ll love, a couple you might hate – but even if you don’t agree with all of them, the beauty is you can head out into the online world and consume whatever you wish. This is where the best video streaming services could come in handy.

“In space, no one can hear you scream,” said the original Alien tagline in 1979. Unfortunately, screams can be heard in cinemas and living rooms across the world, every time a facehugger or chestburster makes an appearance in this tension-filled sci-fi horror franchise.

Alien and Aliens knocked it out of the park, even if the rest of the franchise – headed up by our heroine Helen Ripley (Sigourney Weaver) as she attempts to save what's left of the human race from a bloodthirsty alien species – didn’t hit the same dizzy heights. The less said about the Alien vs Predator spin-offs, the better.

Arguably the biggest character to make the transition from comic book to silver screen, it’s fair to say the Batman franchise has had its ups and downs over the years.

After Batman had been flapping around without any real sense of direction, Christopher Nolan took the helm for The Dark Knight Trilogy and was a huge success, with Christian Bale steadying the ship as the Caped Crusader. But a hero is only as good as his villains, and Batman's iconic adversaries such as the Joker, Penguin and Bane just enhance the franchise's appeal.

It's just a shame Ben Affleck's Batman crashed and burned, and it still remains to be seen whether his replacement, Robert Pattinson, is good enough to lace Batman's boots.

If fast cars, high-octane heists and crazy stunts are your thing, look no further than this ridiculously popular franchise which has spawned short films, a TV series, video games and even a theme park ride.

Vin Diesel has been behind the wheel since the original film launched in 2001, with a cast that has included the late Paul Walker, Michelle Rodriguez and, more recently Jason Statham and Dwayne “The Rock” Johnson. No matter what you think of the franchise, there’s no arguing with gross worldwide earnings way in excess of $5 billion.

Michael Myers has been terrifying audiences and inspiring slasher horror flicks for more than 20 years. Plots and storylines might have veered off in in different directions over the years, but this franchise has it all.

You’ve got a deranged serial killer who just won’t die, a simple yet effective modus operandi, a hero (mainly played by Jamie Lee Curtis), and, of course, a scary mask. John Carpenter directed the 1978 original and his haunting soundtrack still gives us goosebumps to this very day.

Based on the fantasy novels written by J.K. Rowling, the franchise follows three young wizards – Harry Potter, Ron Weasley and Hermione Granger – as they attempt to juggle their education at Hogwarts School of Witchcraft and Wizardry, with their battle against the evil Lord Voldemort.

But it’s not just the star pupils that make this franchise, it’s the whole magical world in which they live and it’s supporting characters – played by the likes of Alan Rickman, Gary Oldman and Robbie Coltrane – that really draw you in.

All together now: de-de-de-derrr, de-de-der… The Indiana Jones franchise follows the exploits of its titular hero (played by Harrison Ford) – an archeology professor who moonlights as a snake-fearing, whip-wielding-adventurer on the hunt for lost treasure.

His exploits bring him face to face with everything from the Holy Grail, to the Nazis, to aliens, and his own father, played by the excellent Sean Connery. An entertaining franchise that’s fun for all the family with a soundtrack to match.

Bond – James Bond – and his gadgets have been entertaining us on the silver screen for well over 50 years, with 26 movies in the can to date. Sean Connery, David Niven, George Lazenby, Roger Moore, Pierce Brosnan, Timothy Dalton and Daniel Craig have all played the world’s most famous and fictional MI6 agent, leaving us shaken and stirred in the process.

The 27th movie in the franchise, and Craig’s last outing, No Time To Die is set to hit cinemas on 12th November 2020.

The Lord of the Rings

Who knew a piece of jewelry could cause so much kerfuffle? Peter Jackson’s adaptations of J.R.R. Tolkein’s fantasy novels, based on the adventures of Frodo Baggins and friends, have wowed audiences across the globe, generating billions of dollars in box office revenue.

Spanning three films and more than 11 hours total running time, it's an epic franchise in more ways than one. Just be sure you buy enough popcorn to see you through to the end of your movie marathon.

With a total of 23 Films currently in its stable, and with no sign of the franchise slowing down, there’s surely something for everyone in the Marvel Cinematic Universe.

From Avengers: Age of Ultron to Doctor Strange, Guardians of the Galaxy to Spider-Man: Far From Home, if you want to channel your inner superhero, this is the franchise for you.

All the films in this franchise major on action, entertainment and high-tech gadgetry, and their explosive soundtracks are a serious workout for any home cinema system.

Even Sylvester Stallone couldn’t have predicted the impact of Rocky's underdog story when he first taped up his fists back in 1976. Six films and a number of montages later, we can look back on the original as some of Sly’s finest work both from an acting and writing perspective.

Rocky’s appeal is also undoubtedly fueled by the quality of his opponents: Apollo Creed (Carl Weathers), Clubber Lang (Mr. T), and who can forget the Soviet boxing machine that was Ivan Drago (Dolph Lundgren).

When Star Wars: Episode IV – A New Hope hit the cinema in 1977, it set a course for all for all other blockbusters to follow.

The struggle between good and evil isn’t exactly a revolutionary formula, but Star Wars packaged it into a series of films that captured the imagination and continues to entertain small and big kids alike. Arguably the definitive move franchise, even when you take into account those shocking prequels.

Arnold Schwarzenegger stars as a time-traveling cyborg sent to ensure, then halt the rise of the machines. The Terminator (1984) was an impressively gritty affair that made Arnie a household name, while Terminator 2: Judgement Day allowed director James Cameron to go wild with impressive special effects and give the Terminator character enough depth to deliver the film’s emotional climax.

It’s a shame that the four Terminator films in the series that followed haven’t fared quite as well, but you’re pretty much guaranteed the franchise will be back…

The Toy Story franchise brought to life an entire toy box full of adventure-loving characters, headed up by Buzz LightYear (Tim Allen) and Sheriff Woody (Tom Hanks). And in case you didn't know, the original Toy Story was the first movie was the first feature-length film to be made entirely from CGI.

It's entertaining and colourful enough for kids to enjoy but it's also packed with plenty of nostalgia and childhood memories which are more than capable of reducing grown adults to tears.