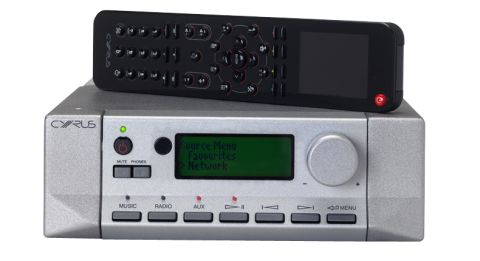 Best streamer £1000-£1500, Awards 2015. A fantastic performer that sets the benchmark for sound quality in streaming

Cyrus has long pitched itself as the brand to beat when it comes to premium streaming. And the Cyrus Stream Xa continues that winning trend.

Ever since music streamers became a What Hi-Fi? Awards category in 2011, a Cyrus product has occupied a spot or two.

It’s a Cyrus product through-and-through, not just because of its half-width aluminium casing and agricultural black-on-green display, but in its sound, too: precise, controlled and agile with an effortless musicality that can bring any genre of music to life.

Engaging and transparent, the Stream Xa has a rare knack for drawing you into a song and keeping you there.

Its honest delivery of Tchaikovsky’s Piano Concerto No.1 in B Flat Minor Op.23 is awash with perfectly placed instruments loaded with texture and subtlety.

The Cyrus’s dynamic know-how makes the most of the varying orchestration, capturing the intensity of the explosive start before picking out the subtle variations in the leading strings. Its gift for dynamics and astute accuracy make a complex track like this hard to skip.

Its presentation may be close to sanitary, but precision and organisation aren’t trades off for energy and liveliness. Feed the Stream Xa Supertramp’s Breakfast In America and the song’s giddy rhythms brim with pep and pizzazz.

The streamer launches into the intro’s catchy keyboard – each crisp note exact and punctual – and you can tell the joining instruments are being played enthusiastically.

Open and expansive, the Stream Xa’s soundstage has good spatial awareness, so the jumble of piano, trombones and brass that make up the anarchic chorus never feel cramped together.

Tonally, the Cyrus takes the middle path: the midrange is lucid and detailed between a sparkly treble that’s clear and controlled, and a tuneful, agile bass. Sounds have more body and warmth through the richer Pioneer N-70A, perhaps, but the leaner-sounding Cyrus has more solidity.

Vocals are clear and rich in insight, the streamer really getting under the layers of the backing vocals.

Away from sound and, as the rest goes, the Stream Xa is an easy machine to figure out. It can stream files up to 24-bit/192kHz over a wi-fi network, though we’d always go down the more stable wired route.

In true Cyrus style, there are slots to facilitate upgrades, should you wish to add the company’s PSX-R power supply for more power, clarity and detail, or an external DAC. There are also the usual MC Bus connections for universal control of a multi-machine Cyrus set-up.

The unit’s small, three-line display is less than ideal for browsing folders manually, so we’re glad the streamer has two decent alternatives: the Cadence app and ‘n-remote’.

Logical and intuitive, the app has a neat layout with helpful shortcuts (such as a pop-up window to flick between inputs) to make your life easier. We like how the background image is the familiar top of a Cyrus unit: nice touch.

For those who prefer the more tactile feel of a remote, the ‘n-remote’ is a thoughtfully designed, do-it-all tool with a small screen providing visual aid for navigating servers. The button layout is easy to get along with, and browsing is surprisingly speedy thanks to alphabetical shortcuts on the number keys.

We are equally happy using either control method, though you can’t use both at the same time.

The Cyrus Stream Xa’s compact design won’t be everyone’s cup of tea. But its truly entrancing sound undoubtedly will.

At the end of last year it proved the best-performing streamer at this price, bagging a well-deserved Award. In a fast-moving category, that it’s in with a good shout again this year should be all you need to know.

Read all our music streamer reviews