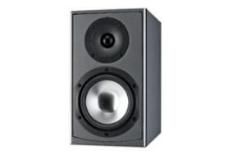 German company Canton has plenty of pedigree. It doesn't feature often in our pages, but does a roaring trade across mainland Europe.

The GLE range is one of eight under its ‘hi-fi' umbrella, which sits alongside ‘home cinema' and ‘pro house' products.

‘Music is eroticism for the ears', says Canton's magazine highlighting the company's line-up of speakers. It's a bold statement, and one that we hope will point towards a heart-quickening performance from the GLE 420s.

It's a good thing sound is key, too: unless you get turned on by a grille that looks like a fan heater made out of recycled sieves, there's not a lot of visual stimulation here.

While a different finish – there are seven other finishes to choose from besides the silver here – might be more to our personal tastes, they still feel the least solid and, simply, the least inspiring in terms of build we've seen for a while.

Lively treble and weighty bass
They sport an aluminium mid/bass driver and a soft-dome tweeter, and, standing a smidgeon under 30cm tall and 26cm deep, are a fairly typical size for standmount speakers.

Looks, though, aren't everything, and it's the sonic capabilities that are most pertinent. Despite its fair period of absence from our listening rooms, we recognised the Canton sound in no time.

Listening to the eponymous title track from the soundtrack to The Road, there's plenty of life in the treble, with piano keys hitting sharply, if not as precisely as we might like, while bass notes have weight and depth.

But move on to Vampire Weekend's Horchata and there's a lack of body and intimacy in the midrange, with vocals sounding a little reticent and closed.

Lacking in substance
So while there's plenty of excitement, beneath this upbeat exterior there's not the substance to get your teeth in to.

The GLE 420s can be a little wearing, too. Florence and the Machine's Dog Days Are Over is a track that's on the verge of hardness as it is.

The 420s tip it over the edge, with certain frequencies causing winces and Florence's forceful vocal grating all too soon.

These speakers would undoubtedly liven up a subdued system, but we require a little more subtlety and a little less shouting to get turned on by a set of speakers at this price.