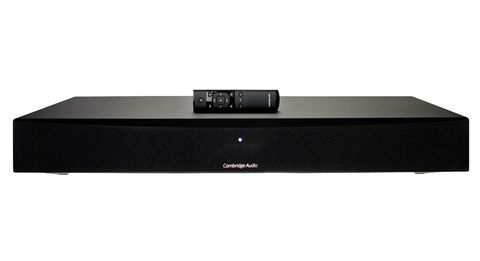 It's only been a few months since the Cambridge Audio TV5 breezed its way to a five star review, but with a recent price drop bringing it to within £50 of its smaller TV2 sibling, we thought it was well worth another look.

Ultimately, the TV5 is a larger version of the Award-winning TV2. It features the same no-frills, functional design as its stablemate, with a matt-black chassis and cloth grille front covering the same dual 57mm drivers.

It is, of course, bigger, measuring 18cm wider than the TV2 (making it 73cm), but the main difference between them comes in the form of the TV5’s second downwards-firing 16.5cm bass driver.

Though this doesn’t affect the level of amplification the TV5 is capable of, matching the TV2’s 100W power output, the larger enclosure and extra driver help to deliver a much bigger and better-balanced sound.

When it comes to character, the TV5 shares the rich, full-bodied presentation of the TV2, but adds to it across the board, with better levels of detail, more clarity, and improved dynamics.

It’ll fill larger rooms more easily thanks to the greater scale it’s capable of with that second bass unit, and it does so with an openness that makes it one of the more immersive viewing experiences you’ll get at this price.

Take the final battle scene of Fury and you hear that extra low-end come into its own instantly. With every gunshot and grenade blast, the deep, rumbling bass punches with a level of authority and articulation the TV2 can’t quite muster.

This bold bass presence gives the character of the TV5 added solidity compared with its smaller sibling, and enough refinement to ensure it never sounds flabby or overdone.

It’s this weighty low end that helps to balance out any treble brightness audible in the TV2, meaning the TV5 can be pushed loud and still maintain complete control across the frequency range. It’s really comfortable to listen to over long periods, with no hint of harshness.

There’s stacks of detail to play with here too, which makes for a more precise and dynamic listen. In particular, soundtracks benefit from this dynamic flair, filled as they are with the expression they need to build tension and emotion in a way that the TV2 can’t convey.

The minimalist design isn’t in the least eye-catching, but it’s functional at least.

Build is reassuringly sturdy so you won’t be afraid to mount a hefty TV on top of it. Our only gripe: while a single, colour-changing LED indicates sources well enough, we’d prefer everything spelled out with a text display.

The remote is as no-frills as the rest of the design, with just a handful of buttons covering EQ settings and volume controls. As ever we’d recommend playing around with them to find a sound mode you like most.

The TV5 (like the TV2) is analogue-friendly, with both 3.5mm and RCA sockets, and an optical input too. It supports aptX Bluetooth and, while there’s no sign of NFC, it has its own neat trick for making Bluetooth pairing quick and convenient by remembering up to eight paired devices and connecting to them automatically when they’re in range.

Also handy (and in this case, environmentally friendly) is the Cambridge Audio’s ability to automatically power down when sound isn’t detected after what the company quotes as ‘several seconds’ and switch back on when it finds a signal again.

Those who covet convenience might also prefer to set up the base so a TV or Sky remote can control its volume.

Cambridge Audio describes the TV5 as a “step up in size and sound” from the TV2, and they’re right on both counts. The extra driver and bigger chassis do wonders for the TV5’s performance.

If you can accommodate the TV5’s larger size, you’ll hear the difference with every film you watch. This is the best budget soundbase you can buy.