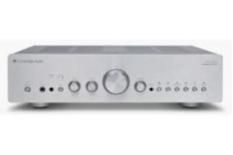 Unbeatable for scale and insight, but the 650A sounds just slightly detached

When we gave the stylish Azur 650A the First Test treatment back in August 2009, it was emphatically anointed as a five-star frontrunner and ‘a fine buy'.

So – bearing in mind the number of stars reducing by a mighty one – what on Earth can have gone wrong in such a relatively short space of time?

The short answer is: nothing fundamental. The Cambridge is still a fine buy. For starters, its specification is comprehensive enough to satisfy anyone buying within this price bracket.

It's fitted with six line-level inputs (two with line-level outputs for use with recording devices), switching for two pairs of loudspeakers and 75 watts of power per channel. And if you're not keen on the silver finish, you can have it in black. It all makes for pretty good reading.

Cambridge's Navigator remote is comprehensive, if a trifle confusing, and where build quality, finish and looks are concerned the 650A's the equal of anything in this price class

Amplifying Arctic Monkeys' Cornerstone, the 650A delivers a luxuriously widescreen sound – the Cambridge finds space on a soundstage where its rivals simply don't.

This expansive, beautifully separated sound isn't at the expense of integration or coherence, though: the 650A extracts copious detail through the midrange, punches with purpose and control at the bottom end and integrates the entire frequency range smoothly.

There's a hint of brightness to treble sounds that might prove problematic if the 650A is carelessly partnered, but the Cambridge is energetic rather than aggressive when it comes to system-matching.

Wary of getting engaged?

Of greater concern is the rather analytical, disengaged character that's been thrown into sharp relief. “Head-Fi rather than Heart-Fi” is how one member of the review team floridly put it, and there's truth in that: the 650A sounds a little dispassionate compared to its near rivals

Of course, you're entitled to value scrutiny and insight over emotion and engagement – and if that's the case the 650A makes as much sense as it ever did.

But we think it's possible to buy an amplifier (or two), even at this modest price, that covers all bases a little more evenly.