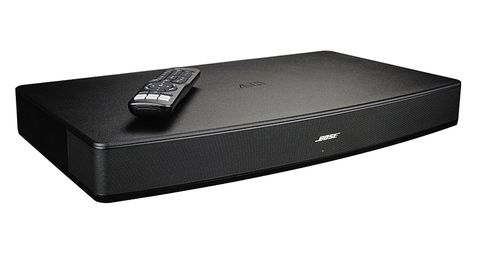 A big bold soundbase from Bose, but it lacks the refinement of some competition

Recently there seems to have been a trend for manufacturers to produce two very similar soundbases – one for smaller TVs and one for larger.

This usually means a shared character between the two. Not so with the Bose Solo 15 Soundstage – and that’s no bad thing because we were mightily disappointed the last time we saw a Bose soundbase.

Scraping three stars, the Bose Solo TV lost marks for its harsh dialogue and loose bass. Thankfully it appears such traits don’t run in the family, and the bigger Bose Solo 15 Soundstage is far better qualified to be left in charge of your movies.

Bose’s big message with the Solo 15 is simplicity, so there’s little in the way of inputs or features. The back panel is about as straightforward as they come, with just optical, coaxial and RCA inputs while, unlike many competitors, Bose has decided against including Bluetooth.

Despite a rather chunky universal remote in the box, which you can program to work with all your kit, there are no settings to tweak – no EQs to play with or voice settings to choose. The only thing Bose has introduced is a bass dial.

The Solo 15 a sturdy, well-built unit that will hold TVs up to 50in and 34kg. Behind its curved metallic front grille are four drivers and a subwoofer.

These are configured into a centre channel to help ensure clear dialogue, and speakers mounted on the outside edges, firing sideways to help create a wider sound.

And the Bose Solo 15 is pretty successful in its endeavours – managing to sound big and spacious both horizontally and vertically. With some soundbases you’re still able to pinpoint the sound to the unit, but with the Solo 15 there’s enough lift here for it to seem as if it’s coming directly from your TV.

The Solo 15 has been tuned in a way that makes it a really easy listen. The presentation is nicely balanced, with solidity throughout the frequency range and no hint of hardness at the top end, even when the volume is pushed up.

Bass is deep and much better-controlled here than on the Solo TV. During Kitai’s showdown with an Ursa in the final fight scene of After Earth, every blow is backed up by powerful, punchy bass that helps the Solo 15 sound confident and authoritative.

That said, the overall presentation is lacking some expression, particularly though the midrange and treble. While there’s definitely a step up in detail from cheaper soundbases here, the Bose can’t compete with the subtleties uncovered by the likes of the Canton DM 75.

This means, dynamically, it isn’t skilled enough to convey the tension as the soundtrack intended in this scene, which can leave it sounding a little flat.

The Solo 15 offers a straightforward way of improving your telly’s sound, plus a level of refinement you won’t find in cheaper units costing less than, say, £250.

We wouldn’t expect the subtleties found even further up the ladder but, even at this price, we’d like to see a touch more expression to complement the Bose’s bold character. And Bluetooth connectivity wouldn’t go amiss either.