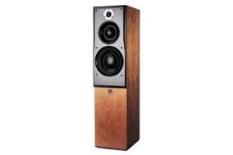 For an unexpurgated insight into your music, you’ll struggle to better these

it's been the thick end of three years since first we wrestled ATC's substantial SCM40s from their packaging.

In that time, they've established themselves as one of our favourite floorstanders at the price – but how well do they wear their age?

The short answer is: perfectly well. For the longer answer, we have to start with the looks.

Floorstanders are pieces of furniture almost as much as functional items, and while build is impeccable and the veneer luxurious, you'll need to be a fan of the ‘dumpy, boxy' design school to get excited.

Dynamic, detailed and subtle
That's as opposed to the sound the SCM40s make, which is certainly exciting. Listen to The Rolling Stones' Monkey Man and you can add the words ‘dynamic', ‘detailed' and ‘subtle' too.

The ATCs have the incontestable authority to take the song by the scruff of the neck and bring it bounding to life.

The by no means easy trick of integrating all three drivers is pulled off with something approaching disdain, so the SCM40s enjoy crisp timing, an expansive, explicit soundstage, and fine stereo focus.

Low frequencies are deep, taut and responsive, the midrange occasionally torrential in the amount of detail and expression it delivers, and percussives at the top end shine benignly.

This winningly even and musical tonality is apparent whether playing small-scale, subtle recordings (when the ATCs sound like they've shrunk to the size of dextrous standmounters) or full-on orchestral blow-outs (when they sound big enough to fill a concert hall).

Superb, but a little unforgiving
Three years hasn't blunted the ATCs' charms, then; neither has it eradicated their one limitation – their frank honesty. Listen to Jack Hayter's Practical Wireless and its shortcomings are laid bare.

Fine if you don't want the warts airbrushed from your music, worrying if you listen to a lot of poor recordings.

That, and a lack of sensitivity that means they need to be shown the whip if you're to enjoy them at high volume, is the extent of the gripes.

These remain among the best £2000 floorstanders around.