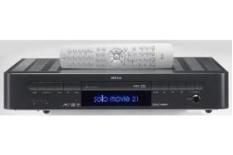 We like a little more flexibility in our equipment, but if the Solo 2.1 ticks all your boxes then it won’t disappoint

Arcam Solo Movie 2.1 deals
View Similar Amazon US
Amazon
No price information
We check over 130 million products every day for the best prices
powered by

Are you a decisive sort of person? Once made up, does your mind stay made up?

That's the sort of resolute thinking required of the prospective Arcam Solo Movie 2.1 owner, because this isn't the sort of product to indulge vacillation.

Essentially, this is a home cinema in a box for those who don't really want a home cinema, or more specifically the numerous loudspeakers that a surround sound system requires.

The Solo Movie 2.1 incorporates DVD drive, amplification for two speakers plus a pre-out for a subwoofer, DAB/FM tuner and CD playback too. There are analogue and digital audio inputs and outputs, a pair of HDMI inputs and one output, and pre-outs for a pair of active speakers.

No surround sound with Solo Movie 2.1
There's no provision for expanding the Solo's configuration to full 5.1 sound so, like we say, you'd better be absolutely positive that you'll never, ever want to enjoy surround sound. As long as you are, the Arcam is a thoroughly likeable device.

If you've seen any of our reviews of the Solo Movie 5.1, you'll be primed for what to expect here. Upscaling a DVD of Tarantino's gonzo Deathproof to 1080i resolution, the Arcam delivers lustrous, vivid images that handle the glaring red and orange tones well.

Contrasts are dealt with effortlessly, picture noise is repressed in all but the most complex scenes, and the Solo tracks motion efficiently. Only a slight, but definite, tendency to soften edges a little prevents it from impressing entirely.

Well presented, detailed sound with Arcam
Movie sound follows the established Solo template, too. It's broad-beamed and burly, trading off the finest details in favour of a warm and inclusive presentation. Naturally, there's no surround effect when only using two speakers and a sub, but the Arcam offers a broad and well delineated soundstage. Dialogue is particularly natural and believable.

And there's more of the same when it comes to playing CDs.The Solo Movie 2.1 is reminiscent of Arcam's £1000 Solo Music in its conviviality, a copy of John Cale's Fear is a Man's Best Friend impressing with its precise timing, polite attack and altogether unthreatening demeanour.

For what it is, Arcam impresses
There's more bile and desperation to the song than the Arcam describes, but as an all-in-one solution it's mightily impressive. The ability to chose whether the subwoofer joins in with two-channel music or not is just one of the thoughtful in-menu touches.

So if you're clear-thinking enough to reply ‘No! Never!' to the question of surround sound, you can enjoy all of the benefits of a Movie Solo with none of the attendant speaker issues, and pocket a handy chunk of change.

The indecisive will, as usual, have to think again.