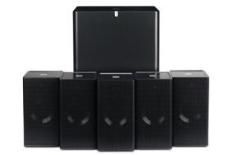 If sound quality rather than aesthetics is your primary concern, then the Arcam is the system for you

These speakers look boxy compared to the most stylish packages, but what boxes they are: each Muso satellite is a quality slab of black (or silver) class. They're well built, with smart clip-on grilles, and offer a kind of minimalist splendour. Okay, they're not at all curvaceous, but the design tends to blend into the background.

The Logo subwoofer is equally boxy, but we'd have a harder time bigging up its style credentials. It does boast a -downward-firing bass driver, powered by a 250w amplifier, and control options, including for the crossover.

The thing this system does better than any other in this test is integrate the sound of the five satellite speakers with the subwoofer. This is a tricky feat for small systems, but the Arcam forms a seamless front with no obvious cracks. That integration is horizontal as well as vertical, with the front three speakers providing a wall of sound Phil Spector would've been proud of.

As a result, dialogue is locked to the screen, while the left and right channels take care of the bulk of the important sounds. At its optimum, this system is breathtaking, with a solidity beyond belief.

Utterly immersive
Surround effects are also top drawer, and with the TrueHD sonics from The Matrix this system provides an utterly immersive experience. The high-octane action also shows the subwoofer is as capable as the sats, providing tight and taut bass that drive on the action.

Finally, as you'd expect from a hi-fi brand with Arcam's reputation, this primarily movie-orientated system is also a dab hand at music reproduction. Talking Heads' Stop Making Sense sounds absorbing in either the two-channel mix or extravagant 5.1 multichannel form.

At the end of the day, only the lack of style means this incredibly capable and impressive system isn't faultless, but if you don't mind spending a little more on a system that looks a little anonymous, this one could be for you.