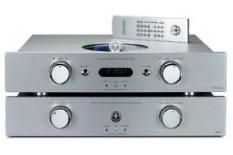 Accustic Arts is a name that's new to us, but judging by the quality of this German two-box CD player, it's a company to be reckoned with.

The Drive 1 Mk2/DAC 1 MK4, to give them their full names, are immensely well built, as you'd expect at the price. The Drive 1 Mk2 transport is a simply laid-out affair, with chunkily proportioned controls.

We particularly like the sliding mirrored cover that protects the disc-spinning mechanism: it feels solid and lights up a funky shade of blue, if desired. As with most specialist manufacturers, Accustic Arts buys in an OEM CD-spinning mechanism rather than making one in-house.

Here, it's the well-proven Philips CDM Pro 2M. This CD player is one of the most natural and fluid we've heard. It makes much of the competition sound mechanical, and mirrors the organic quality people like in vinyl.

Voices and instruments are richly textured, which adds considerably to the sense of believability. Treble has to come in for a special mention: it shimmers when required, is refined, and packed with detail. There's not a hint of the bright, hard sound that CD replay is still tarred with.

Rather pulls its sonic punches
So far, you know there is an awful lot this two-boxer does well. It's undoubtedly right up there with the very best in its areas of strength. However, the Accustic Arts isn't quite the brilliant all-rounder we hoped for.

Play something simple such as The Beatles' Help!, and you'll notice a subtle lack of exuberance and drive. This player pulls its punches when it comes to delivering hard-hitting dynamics, and so fails to milk a recording for the last percentage point of drama. A slightly lazy attitude to timing doesn't help.

We have to keep things in proportion, of course: neither of the shortcomings we've mentioned is massive, but they do manage to take the edge off what is otherwise a class-leading performance.