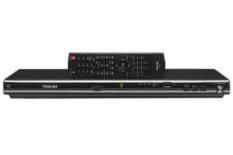 A quick look at this £60 Toshiba player shows there's still plenty of life in budget players. The SD580 is packed with features. At the top of the list is its HDMI output. The Toshiba can upscale standard definition DVD to a maximum of 1080p, and output Dolby Digital and DTS over HDMI.

You've also got access to a set of component video outputs and an RGB Scart socket to connect to older TVs.

You can use REGZA Link to operate a compatible Toshiba TV from the one remote control. And another useful feature is the SD580's compatibility with DivX discs. There's even a USB input on the front for connecting a portable storage device.

Budget feel, fine performance
The player has an undeniably budget build quality, but you can still draw satisfaction from the slender, simplistic form factor.

Still, picture and sound quality are of far greater importance. And, for the money, it's hard to grumble. DVD images are well-defined and detailed. Upscale Iron Man to 1080p and the Toshiba digs up plenty of detail.

Images look natural and unblemished – colours are rich, but natural tones shine through. The picture isn't completely noise-free but it's more than acceptable for the money.

The sound produced is exciting and dynamic as well. Throughout Iron Man's aerial acrobatics, Robert Downey Jr's dialogue is clear.

More expensive players such as Onkyo's DV-SP406 offer greater solidity across the board, but the SD580 doesn't struggle to entertain. If you're looking for a great second-room DVD player, then this has all the key features you could wish for at the price.