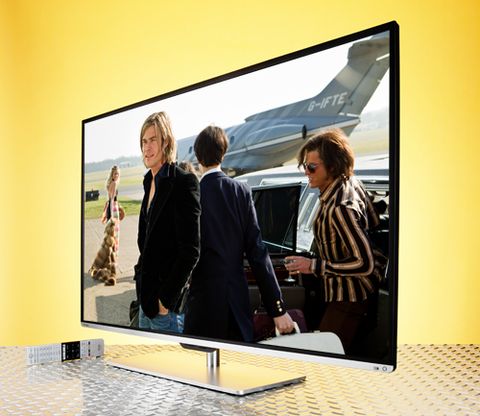 The Toshiba 50L7355DB has quite the fight on its hands.

Up against a fiercely competitive marketplace filled with arguably more consistent-performing competition, it was never going to be a walk in the park for this entry-level 3D LCD set.

Its design certainly looks the part, with a silver rectangular stand and black-and-silver bezel.

It’s one of the better-specced sets at this price when it comes to inputs too, with four HDMI ports alongside two USB inputs and a built-in Freeview HD tuner, though there’s no satellite input for Freesat or Sky.

Things don’t get off to a great start while we’re setting up the TV. With our trusty THX disc on screen, tweaking the picture to suit quickly becomes a rather frustrating affair, with sluggish menus holding us back from getting the job done quickly.

So long is the wait on some occasions that we find ourselves pressing the button again, only to cancel out our original request.

The remote feels a little cheap for a set at this price point, too. Our sample rattled when shaken, which we tracked down to a rather wobbly battery cover.

Occasionally we also found buttons unresponsive when pressed, even after numerous changes of batteries. This could well be down to a fault with our sample though.

HD channels through the Freeview tuner get this TV back on the right foot again. The picture looks bright and vibrant, if not the last word in detail compared with others in the test.

Whites are seriously bright, though there is a tendency to lose any depth or detail within them, bleaching them out in preference to retaining genuine subtlety.

A closer inspection of the TV’s treatment of colour shows up some interesting results.

Watch live action instead, such as a Blu-ray of the 2012 Olympics, and this over saturation isn’t quite as off-putting or as obvious, and can instead make for a rather inviting watch.

Contrast is passable, but could certainly be better.

For example, in the famous Walt Disney castle scene opener, the stars in the sky look to be fewer here than on the Panasonic or Samsung, and they pack less punch as well.

We turned up the Black/White Level settings from ‘Off’ to ‘Low’ in order to improve this, and while it helped somewhat (as well improving black levels), it didn’t raise the Toshiba’s contrast performance to the levels of its competitors.

3D is included here in an active flavour, but the result isn’t a particularly convincing one.

Image instability crops up more than we’d like, particularly in busier scenes or when anything is brought to the forefront, and motion – while not always a smooth ride in 2D – can feel particularly jerky when in 3D.

ClearScan, Toshiba’s anti-blur technology, is a greyed-out option when in 3D mode, which could well explain it.

Sound, on the other hand, is handled rather nicely. There are a few options for tweaking it in the menus (if you have the patience), but we found the screen performed reasonably well on the standard setting.

It’s a weighty sound, but we did find too much bass can cause the drivers to release a rather odd squeaking sound. We turned the bass down in the audio menu to counteract this.

Toshiba’s new Cloud TV interface feels a long way from competing with the likes of Samsung or Panasonic’s offerings.

With iPlayer, Netflix and BlinkBox alongside the likes of YouTube and BBC News, its app selection isn’t bad, but the design lacks refinement and feels only half done.

Apps are often repeated on a page to make it look busier, low-res images are stretched to fit into bigger ‘featured app’ boxes, and sometimes elements of a page, such as the trending on Twitter box, just doesn’t load.

It lacks the simplicity of other systems, and its not customisable either.

This Toshiba always had a fight on its hands. With so many ifs and buts to its name, it’s a hard one to recommend.

You can get a much better TV with a much more consistent performance elsewhere in this test without having to spend as much money.

And that’s a problem the Toshiba just can’t shake.