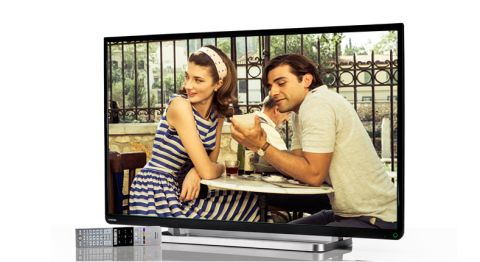 Rivals may be slicker, but Toshiba’s picture and spec mean it warrants an audition

Toshiba TVs haven’t been having the best of times this year. A sluggish interface and so-so picture quality have been pushing them down the wish list.

But then comes along the Toshiba 42L6453DB. It’s not slow or lagging. It has a bright and colourful HD picture. It has Netflix. And it’s only £430.

Get the Pacific Rim Blu-ray on the screen and the Toshiba delivers all the hues inside the Shatterdome base station with vivid enthusiasm.

The purple, green and orange highlights against the deep blues and greys of the giant Jaegar robots are brightly lit and punchy. The yellow lighting is warm and inviting. It’s a colourful, exciting screen.

There’s plenty of detail, with crisp edges to objects, but the colour tone could be subtler. The presentation looks overdone at times, with greens looking a bit radioactive and skin-tones lacking naturalness.

Black levels, on the other hand, are satisfyingly deep and inky, which helps bright colours pop even more.

There’s a slight issue with motion though – not enough for us to gripe about too much, but there are hints of instability when a character is walking across the screen.

The Toshiba’s upscaling is decent, but there’s noise around the edges of figures. The emphasised sharpness makes objects look a little etched, too, robbing scenes of depth.

However, standard-def channels and DVDs don’t suffer unduly. The Toshiba wins points by delivering a loud and expansive sound.

The roars of engines on Top Gear have muscle, though the presenters’ voices can sound hollow. At least there aren’t any bright edges, but we’d like a cleaner, more detailed sound.

The build quality is decent, but for a slight wobble on the stand. It’s a little chunky, as is the remote control – but it works just fine.

It is a little ungainly to use, but it’s not the sluggish operator we’ve experienced with previous Toshiba TVs this year. Response times are decent, and using the TV is painless.

Enter Toshiba’s Cloud TV platform and you will be bombarded with widgets and information: Twitter feed, TV recommendations, weather and apps crowd the screen.

We’ve come to expect BBC iPlayer, Netflix and YouTube as standard features of a smart TV, and the Toshiba delivers.

There’s no ITV Player or 4oD, but the Toshiba offers Blinkbox, Vimeo and Aupeo! streaming.

We only wish we could rearrange and display the most prominent apps and widgets like Panasonic’s My Home Screen allows you to do; it’s a crowded interface.

There’s an optical output, ideal for a soundbar or soundbase.

The Toshiba 42L6453DB fares a lot better than other Toshiba models we have seen this year, with a picture sure to attract many.

An outdated interface may put some off, but this 42in has the essentials you’d want from a 2014 TV.