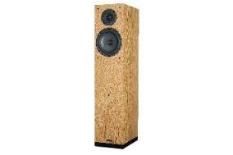 Outstanding speakers without any obvious flaws. In fact, they don’t have any obscure flaws either. These Spendors are true must-hear hi-fi

Size is no guarantee of performance. We understand that, having decided on floorstanders, you might prefer something a little more purposeful-looking than these compact numbers.

Peer a little closer, though. The Spendor A6s are beautifully constructed and entirely bespoke from the drivers to the cabinet reinforcement.

Then sit down and listen, and wonder if you don't perhaps have the need for small but perfectly formed floorstanders.

The same goes for tonal neutrality and transparency, for low-frequency drive and poise, and for sheer midrange articulation.

Indie-pop dynamics pose no problems, and the fleet-footed exuberance of the song is delivered in one piece.

There's frankly unlikely extension and punch where the bottom end is concerned, and the sort of on-a-sixpence entry into and exit from individual notes that only the more accompiished rivals can match.

Traditional values are still there
This isn't to say Spendor has binned its traditional virtues of refinement and composure in pursuit of dynamic attack.

Far from it. Warren Zevon's high-gloss The Hula Hula Boys is delivered with its sneering, wise-after-the-event vocal intact, even as the music is buffed to a shine and the details dished explicitly.

When the going gets minimal, the A6s offer atmosphere to match any rival and can switch to full orchestral overload in an instant if so required. They have what in America might be called an ‘all-court game'.

Shortcomings are few. Like any virtuoso, the A6s are relatively picky about partnering equipment – any flaws in your sources or amplification won't be mercilessly pounced on, but observations will definitely be made.

Other than that, it's all gravy – they're not even all that precious about positioning relative to a back wall.

If you're in the market for speakers at this sort of money, you owe it to yourself to hear the Spendor A6s.