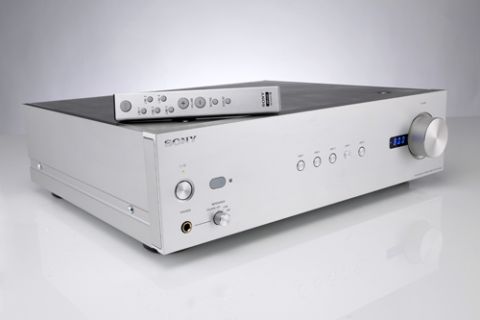 It’s been years since we reviewed a new stereo amplifier from Sony, so it was with more than the usual amount of interest that we unboxed the TA-A1ES.

This integrated amp is the natural partner to Sony’s new high-end music server, the HAP-Z1ES, and suggests the brand is once again treating quality hi-fi seriously.

Our first impressions are entirely positive. This is a large, chunky product that feels precision engineered.

The controls – the few that there are – are lovely to use, and the minimalist feature count hints that the engineers focused on performance first and foremost.

The TA-A1ES is a line-level-only unit. It has five inputs – one of which is balanced XLR - each accessible through a dedicated button on the front panel. There aren’t any record player or preamp connections.

When it comes to outputs there’s a set of the chunkiest speaker terminals we’ve seen this side of true high-end amplification, and a front-panel-mounted headphone socket.

Sony has included an impedance adjustment control for optimising headphone matching, which indicates there’s been more thought put into this area than is normal.

Indeed, take off the top and you’ll find a dedicated headphone amplifier circuit rather than the usual feed direct from the main power amplifier section. This bodes well for headphone listening.

We like the slim remote handset. It feels a touch insubstantial but is simply laid out and easy to use. Sony has paid a great deal of attention in getting the basics right with this amp.

It starts with solid casework and a generous power supply, and extends to the development of new input buffers to isolate the preamp section from external source influence.

The engineers have also developed new, simplified power amplifier circuitry and a volume system that varies output transistor bias with level to optimise sound regardless of listening volume.

Does all this work pay off? Yes, largely it does. The TA-1ES is an impressively pure- sounding product.

Its presentation is clear, immensely detailed and as precise as we’ve heard at this level.

It sounds right at home regardless of whether we listen to Orff’s highly charged Carmina Burana or Eminem’s Marshall Mathers LP2.

We’re taken by the scale and authority of the sound when we listen to Carmina Burana; the stereo image extends well beyond the outer edges of our reference ATC SCM 50 speakers and is delivered with a great deal of confidence.

The TA-A1ES goes loud too – we try a range of speakers including Spendor A6Rs and KEF’s LS50s, and the amp always sounds more muscular than its 80-watt per channel power output suggests.

On a practical note, it does tend to run rather warm when pushed hard, so make sure it has enough ventilation around it when placed in an equipment support.

This Sony is happy to step up a gear with Eminem’s rapid-fire delivery on Rap God, rendering the angry rapper’s vocal with real clarity and fluidity.

There’s plenty of agility, and a deep extending low-frequency reach that can’t help but impress.

The story is similarly positive when it comes to headphones.

All that effort spent designing a dedicated circuit has paid off with a high-quality sound that mirrors that available from the speaker outputs.

The adjustable impedance settings are well worth playing with, as they really do help to fine-tune the sound.

This Sony isn’t quite flawless though.

Compared to Roksan’s Caspian M2, the current champ in this sector, there is a shortfall of rhythmic drive; the TA-A1ES doesn’t convey the momentum or changes in pace of music as well as it might.

We’d like a bit more punch too – it all seems just a touch polite at the moment. None of these shortcomings is fatal.

The TA-A1ES remains a talented amplifier, and well worthy of serious consideration.