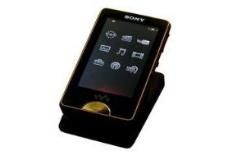 While we’re taken aback by how good it sounds, the poor performance of the browser just can’t compensate

This is the 16GB version of Sony's latest X-Series Walkman. You'll note the slightly different model number compared to the 32GB capacity machine we saw last month, which despite otherwise being exactly the same ‘multimedia portable', sports the NWZ-X1060 moniker in order to flag its larger hard disk drive.

For those of you reading about this machine for the first time, this player is a pretty big deal.

Featuring an OLED touchscreen with 432 x 240 resolution, it borrows a fair bit from the iPod Touch, with one ‘home' button on the unit itself taking you to nine touchscreen icons for the key functions.

The 3in screen is fairly responsive but doesn't have the same elegant dexterity as its Apple rival – you can't zoom in and out of the internet browser using finger controls, for example and it would be nice if it was a little bit bigger.

You'll get 33 hours of music playback time and nine hours of video, which compares favourably with the Touch, and it's worth pointing out there's plenty of YouTube integration – a direct link icon, plus useful search prompts referring to whatever you're listening to.

You also get a set of noise-cancelling earphones, though we're left non-plussed by their effectiveness.

Bundled with the player is the latest version of Windows Media Player, plus Sony's Media Manager and Content Transfer software.

Media Manager does a fine job, rivalling iTunes in terms of the intuitive layout, ease of use and overall feel, while the Content Transfer feature makes dragging and dropping content even easier.

In fact, it sonically outperforms the iPod Touch: there's greater punch and solidity, helped in no small part by the tight but powerful bass.

Listening to Wyclef Jean's ‘911' in WAV format, the Sony gives vocals space to breathe while still delivering punch and immediacy, plus plenty of detail.

Something a little harder on the ears, in the form of Maximo Park's ‘Wraithlike' from the new album, is dealt with comfortably, given plenty of attack and aggression without losing control. All the usual file formats are playable, except Apple Lossless of course.

Video looks good, too, with WMV and MP4 images looking vivid, punchy and colourful with bright scenes. That said, we prefer the more natural colour palette of the iPod Touch. The Sony's also not quite as smooth with motion, but its overall image is more natural and engaging.

Clunky internet browser
But it's the internet browser that really lets the Sony down. The Walkman gets off to a flying start thanks to a strong wireless range and fast connection but it's downhill from there.

Entering web addresses is laborious and visual rendering of pages is often poor. The NWZ-X1050 too often presents a jumble of words and links – a far cry from the Touch's slick, organised and efficient interface.

We would expect most consumers for this type product to be tempted due to consider inetrnet browsing essential. It's here the Sony scores lowest, struggling to live up to the iPod Touch's high standards.

Sonically this Walkman is excellent, and video performance is strong, but for the complete package, Apple still holds the advantage.