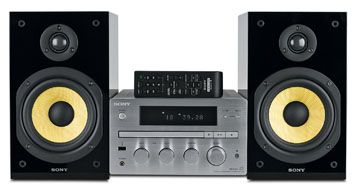 A different flavour to our favourites, the Sony is still capable and fun to listen to

Sony still produces many micro systems, but this one’s a bit special. Most are lifestyle products that try to balance affordability and desirability; the CMT-G1BiP has been designed with sound quality as the priority.

It will play more than just CDs: there’s a DAB, FM and AM tuner and a USB input with support for Apple devices.

Start with a CD and it’s an enjoyable listen, with the body and weight to bring the bass of Flobots’ political hip-hop to the fore, and enough punch and clarity in
the vocal to make every rap ring true.

There’s only a minor quality loss with a switch to uncompressed iPod files. And the Sony majors on fluidity and scale rather than transparency, so it won’t overly expose lower bit-rate rips and downloads.

An experiment with a pair of Dali Zensor 1s proves that that is at least partly a fault of the speakers, but even were it available as a solo unit – which it’s not – the G1BiP would still fall a little behind.

If you do prefer the muscular but easy-going Sony, though, don’t back the speakers against a wall, as they will boom. Bear that in mind and you’re in for a fun audio jaunt.