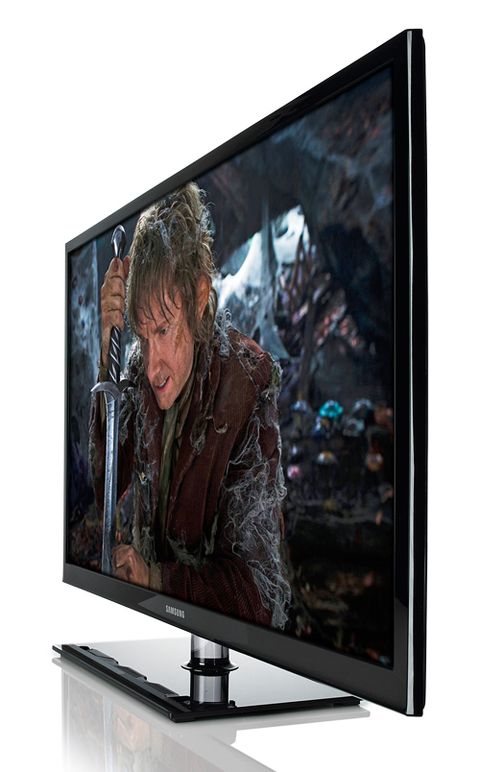 If 3D is important to you, then you should definitely give this TV a try, but there are better 2D-only units out there

Samsung’s trophy cabinet must be groaning with design awards for products across its vast range. It’s certainly produced some of the best-looking TVs of the past couple of years.

The chunky looks of the Samsung PS51E490 did raise a few eyebrows in the office. But who can really gripe? “Budget” is a word that rarely precedes “51in 3D plasma display”.

We actually quite like the fact that there’s nothing ostentatious about the E490: its lines are clean, there’s a nice-looking stand and it’s quite slim at 5.6cm.

Of course, that’s a result of Samsung keeping costs down, as is the rest of the trimmed-down spec.

To that end you get two HDMI inputs, one USB socket, component, composite, PC and Scart connections, optical and headphone audio outputs, DVI audio in and an ethernet socket.

You’re out of luck where built-in wireless is concerned, but a dongle can sort that out for a few pounds extra.

Most telling on the budget front, though, are the screen’s resolution and lack of smart features.

One of the hallmarks of Samsung’s TVs is their fantastic Smart Hub interface, which offers access to a raft of online services – and is conspicuous only by its absence here (you have to make do with playback from USB devices and over your network from DLNA-compatible devices).

Add to that the meagre 1024 x 768-pixel resolution and it’s clear where the savings have been made.

But don’t write the E490 off as a no-trick pony. : Samsung has thrown a bit of a curveball. This is an active-shutter 3D set, and it even comes with two pairs of glasses in the box (the SSG-4100GBs, which can be found for around £15 per pair online).

So, another day, another episode of Homes Under the Hammer, which makes a great tester due to the vast variety of colours, textures and edge-definition-taxing angles it offers. (Also, we’re nosey about other people’s houses.)

It must be said: the standard-def tuner isn’t the best. It conspires with the processing engine to serve up a rather ill-defined picture. Edges are soft, there’s constant low-level noise and text has jagged edges.

There’s also a lack of detail in dark areas, and motion snags in fast pans. But do keep in mind that SD was never designed to be viewed on a screen this big. And anyway, you don’t buy a 51in TV to watch standard-definition content, do you?

Things do improve with the Freeview HD tuner, but only to the extent that there’s more detail on offer. That fizzy layer of noise still exists, but it’s easier to live with here.

Textures are described adequately when they’re static but lose composure a bit when the camera moves across them. Black levels are improved, and highlight areas are better, but whites have a tendency to glare a little, which saps them of subtlety.

Move to DVD and, even though it’s only a standard-def picture, there’s a little more detail on offer than from the HD tuner. Mission Impossible: Ghost Protocol does lack definition in shadowy scenes, but it does have a decent stab at it – and highlights, while again not the most subtle, are at least more believable.

Climb to the top of the ladder with the Blu-ray of the same film and the news gets better again.

Text is still on the processed-looking side and it’s the same story with black detail as before, but it’s a step up on other sources. Sitting further back from the screen helps, too – you see less of the individual pixel effect.

Of course, this is also a 3D set – so it’s on with the specs and in with the Blu-ray of TT3D: Closer to the Edge.

Sadly, It isn’t the best 3D performance we’ve ever seen thanks to a fairly strong diorama effect and no small amount of flicker – you can really feel your eyes working. Honestly, we'd stick to 2D.

One thing we do like is the E490’s picture-in-picture mode. It isn’t a headline feature, but it’s a nice touch – and is perfect for keeping up with the cricket while your kids watch a DVD.

It might sound like we’ve been fairly hard on the Samsung – and in absolute terms, we have. But let’s not forget its price: we’ve found it for as little as £550 online.

No, this Samsung isn’t bristling with features and sure, it doesn’t have the best picture quality. But if 3D is important to you and you want a huge TV for peanuts, give it a look.