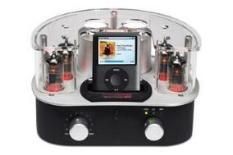 A grown-up solution in a market full of juvenile rivals, the Roth is a must-hear dock

To some, Apple's all-conquering iPod range is the greatest thing about the 21st century. If that's broadly your opinion, you might not consider a valve-driven dock to be appropriately modern enough to amplify your tunes. If the dock in question is the Roth MC4, though, you'll be missing out if you dismiss it without hearing it.

Small and if not perfectly formed, at least very pleasingly put together, the MC4 includes a 3.5mm input for less ubiquitous MP3 players and a stereo RCA input for use with a CD player or similar. Other than that, there's a chunky metal remote control and proper speaker binding posts to ensure the MC4 is a viable amp as well as a dock.

The Roth is supplied with power by a fairly hefty mains supply, which runs relatively hot – and that's not the last time we'll be bringing up the ‘h' word.

Source plus speakers
With an appropriate pair of loudspeakers attached (we used Tannoy's Award-winning £110 Mercury Custom F1s, but the Roth will happily work with something a little more expansive), the MC4 presents a broad, coherent sound-stage and allows plenty of breathing space for performers.

With an iPod in situ, and playing a Lossless copy of Lou Reed's Sick of You, the MC4 is capable of a sound of fine authority and composure. Low frequencies are as warm and comfortable as the valve configuration suggests, but there's none of the languor you might expect from a valve-based system. Instead, the bassline snaps along, integrated smoothly with the clean, expressive midrange and the crisp, uncluttered top end.

Of course, the Roth isn't flawless. Most significantly, it hardens its sound a good deal when you dial in extra volume. You do have to press on, but our 192kbps copy of Richard Hawley's Born Under A Bad Sign becomes tiring when loud.

Can't stand the heat?
And it's when you dial in that extra volume that you realise just how hot the MC4 gets in operation. We understand that the valves get hot, and must be covered by a plastic shroud with a warning etched into it, but we were unprepared for just how warm the casing and control knobs become. Best to stick to the remote control, and make sure your kids don't go anywhere near it when it's in use.

This heat isn't enough to cool our enthusiasm, though. In a world overwhelmed by cheap'n' cheerful or just plain nasty iPod docks, the Roth MC4 is a considered and grown-up alternative. Quirky, yes, but – crucially – it sounds splendid. Your 21st century valve system starts right here.