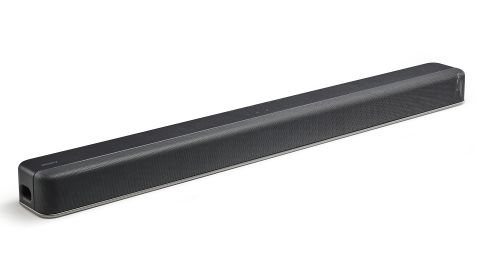 The confluence of Enhanced Audio Return Channel (eARC) and built-in streaming apps for TVs is a wonderful thing for those who want a stonking home cinema setup without umpteen boxes and enough cable-spaghetti to power Glastonbury.

Connect your TV and soundbar using a single HDMI cable, and you’re all set to go. The TV will display 4K HDR content from Netflix and Amazon Prime Video while sending Dolby Atmos audio to the soundbar via a single cable. No extra sources required, and no need to fill your lounge with speakers.

The most sonically successful product in this ‘home cinema without the home cinema’ category is the Sennheiser Ambeo Soundbar, which combines simplicity with cinematic ability. But if your sound system budget doesn’t stretch to £2000-plus, the Sony HT-X8500 is aiming to be the soundbar for you.

Like the Ambeo Soundbar, the HT-X8500 supports both Dolby Atmos and DTS:X via eARC and uses virtual surround sound to throw audio around the room. However, it is closer in size and price to the less highly-specified Sonos Beam.

But, while a decent home cinema soundbar on paper, the Sony HT-X8500 lacks the core sound quality to take advantage of its exciting specification.

Manufacturers appear to be moving away from the soundbar plus subwoofer arrangement in favour of single units – and that’s the approach Sony has taken here with the HT-X8500.

Measuring 89cm across, it’s a wider soundbar than some, but it’s not especially tall or deep, which means it should sit happily in front of your TV without blocking signals from its remote control. Wall-mounting is made cheap and easy by the integrated wall fixings and supplied template.

A mesh grille covers most of the front of the soundbar and curves around the corners and top edge. Behind this sit the drivers – two for handling treble and midrange and two for bass frequencies – in a 2.1 arrangement.

The Sony uses this seemingly modest speaker array to simulate a 7.1.2 speaker package. It supports both Dolby Atmos and DTS:X signals sent to it via either the single HDMI input or the eARC feature of the HDMI output. The only other connections are an optical input for those with TVs that don’t support ARC, and Bluetooth 5.0 for sending music wirelessly to the soundbar.

The bundled remote control is a simple, stick-like affair with buttons to enable the various audio presets. We find 'Standard' produces the most favourable sound, while 'Cinema' is worth experimenting with if you’re looking for a little extra oomph. The 'Night' setting reduces dynamics and bass to help ensure that other family members aren’t woken up by the soundbar in the small hours.

The general slickness of the whole system is let down by the lack of a display, with the tiny LEDs linked to specific features along the top of the soundbar instead responding to your button presses. This isn’t a clear system, and we frequently find ourselves referring to the Sony’s manual in order to see which settings and features are currently active.

Kicking off with the Dolby Atmos infused bombing run scene of Unbroken, the X8500 immediately impresses with the spaciousness of its delivery. These characteristics make all the difference to this scene, with the soundtrack designed to amplify the fragility of the flying tin can in which the nervous young airmen approach their target, the wind noise and engine thrum expanding into the room to good effect.

This is a speaker that disappears in the broad, tall soundfield it creates. The sound doesn’t stretch right around the listening position, stopping a few feet into the room, but for the price and the size of the unit, the precision, openness and three-dimensionality of the presentation is impressive.

The extremes of the frequency range are handled well, too. Treble sparkles without ever sounding harsh and there’s more bass here than you would expect from a compact, one-box solution. That deep, weighty bass combines with strong dynamics to deliver convincing cinematic crescendos. There’s no lack of heft and drama to those big explosions.

But the bass is also a problem – it overpowers the midrange, which is recessed in the mix. Dialogue suffers the most, with characters sounding muffled and unnatural, but there’s also a broad lack of crispness and clarity to proceedings. This is a big, open presentation with plenty of scale and atmosphere, but punch, attack and definition are lacking. Spatially, effects are easily distinguished, but tonally and rhythmically they make much less sense.

The X8500’s lack of rhythmic precision and midrange clarity are yet more pronounced when we switch to music, with Phoebe Bridgers’ vocals sounding unnaturally thick, as if being weighed down. You can reduce the bass, of course, but the result is a rather lightweight delivery that still lacks definition.

Despite the flaws in its sonic presentation, the Sony HT-X8500 is an undeniable sonic improvement over most flatscreen TVs, particularly in terms of delivering cinematic weight and spaciousness.

But, while it delivers big on specs, its core sound quality is a long way behind that of the Sonos Beam, which simply gets to the heart of your movie, TV show or favourite tune far more effectively. The Beam also delivers an open, room-filling sound, even without Dolby Atmos.

While the Sony HT-X8500 will give your TV a sonic boost, it’s far from the best upgrade you can make at this price.