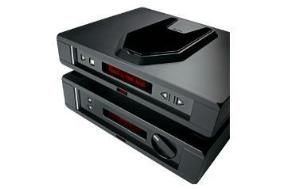 A great first stab at tackling the high-end CD market

Rega tends to walk apart from the rest of the hi-fi industry. It's always done things its own way, preferring to build a reputation with the quality of its products rather than through overt marketing.

The company's heart has always been analogue: its turntables and arms have a massive worldwide following, and rightly so.

But Rega is not just about records: take a look at its portfolio and you'll see it's possible to buy a complete Rega-branded system, from a record or CD player as source, all the way through to amplifiers and speakers.

Yes, we're including all cables and more specialist items such as phono stages, cartridges and headphone amps.

Yet the one thing that hasn't wavered over the years is Rega's focus on offering a great sound at accessible prices.

Taking on the high-end market
But that's now changed: having avoided the high-end of the market for the best part of 40 years, the company has released a CD player and integrated amplifier to take on the high-end establishment.

The Isis has to be the heaviest integrated CD player we've ever come across. At 19kg, it weighs more than many power amps we've tested.

Finish is good, and we can't help but be impressed by little touches, such as the well-judged weighting on the manual CD tray lid and the quality of socketry on the rear.

There's a USB input too, so a computer can use the onboard DAC to optimise sound quality. It's a nice touch, delivering fine results with WAV files of Kanye West and The Road OST from our Acer laptop.

Amplifier is simple to control
The Osiris follows the CD player's lead, physically at least. It's a neat, solid design that's as simple to use as an amplifier can be.

There's only an input selector and volume control on the front panel, yet it still includes high-end touches like balanced connections and a direct connection for those who want to use it as a power amplifier.

Used as a pair (surely the way most will be bought) this is a cracking combination that sounds massively entertaining without being particularly showy about the way it delivers music.

Judged by the highest standards, we're convinced it's possible to buy greater transparency and more expressive dynamics for the money, but that's not to say this pairing is massively short in these areas.

Initmate, passionate vocals
This combination is blessed with a wonderfully focused, insightful sound. It may not cast the most expansive soundstage, but nevertheless delivers a solid, palpable sound.

Vocals throughout Antony and the Johnsons' The Crying Light come through with intimacy and passion, while the backing instrumentation is delivered with composure.

When it comes to musical genre, these Regas are as unfussy as kit gets. We enjoyed everything from Jacqueline du Pré's interpretation of Dvorak's Cello Concerto to Eminem's politically charged Mosh without issue.

This kind of thing only happens when qualities such as tonal balance, timing and dynamics are of a good level.

A split means less-rewarding results
Splitting the partnership results in less rewarding results. Out of an all-Rega set-up the CD player sounds good, but it's open to flak over a slightly heavy-handed approach to bass replay.

And in isolation the amp is a bit too polite, lacking a bit of kick in the bass. By either luck or (more likely) design, if you put the products together they balance out each other's shortcomings to produce an impressively even presentation.

We have the odd operational grumble. The Isis has a noisy transport that sounds like a hyperactive mouse when skipping tracks, and some front panel controls aren't as precise as they should be at this price.

We don't like the overly weighty feel and confused layout of the remotes, either.

But don't get hung up on the negatives: buy this pairing together and you'll save a grand over the combined price, and have a worthy rival to most at this level.

They're not perfect, but even for this sort of money, perfection is hard to come by.