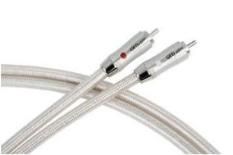 As a flagship interconnect, this QED doesn't let the side down

It's mildly concerning to think of a cable design team being 'let off the leash', but if you believe QED's blurb for its new interconnect, that's exactly what's happened, causing visions of white-coated, bespectacled boffins running amok in a laboratory somewhere.

But if the Signature Audio S is the product of this, then we say let them have free rein, because interconnects sounding this good are few and far between.

This is a stylish silver-plated brute too, although we're not keen on the red writing/silver cable combo, which is hard to see.

Sonically, the Audio S gives you an open, expansive sound, coupled with a wide soundstage. Fans of detailing will be sated here, with production values and nuances held brutally to the light during John Mayall's Hideaway, as are Beverley Knight's luscious vocals in Come As You Are.

Almost the full package
Dynamically too, this cable packs a punch and there's real poise there as well to round things off nicely. But while you get a smooth midrange and springy, propulsive bass, the treble is brilliantly lit and those with a set-up that's already bass-light will find this isn't for them.

Nevertheless, with its new flagship interconnect, QED has produced a fine accessory for most systems. Free-range boffins, eh – who'd have thought it?