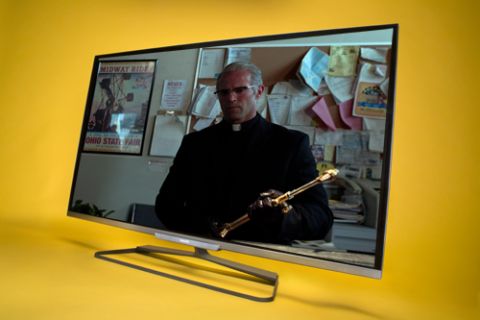 Philips has been near the top of the pile in terms of flatscreen styling for a while now, and the 42PFL6008 42in passive 3D LED TV continues that trend. It certainly looks every penny of its £1000 price tag.

With a slim profile and a vanishingly thin bezel, there’s almost nothing to distract you from the screen itself. Build quality is solid too. That grey skeletal frame-stand may look frail, but it’s nice and sturdy.

The Philips 42PFL6008 is a minimalist, decidedly unflashy design, which is good if you don’t want a TV that stands out in your viewing room.

Peek round the back and you’ll find a comprehensive set of connections: four HDMI sockets, an input each for component, analogue audio and RGB Scart, and optical and headphone outputs.

There are also three USB ports, an ethernet port and a digital tuner. There is a satellite input, but Philips says it’s intended for Nordic countries only. So you may well pick up stations via a satellite dish, but it’s not an official Freesat connection.

Unlike similarly-sized rivals such as the Sony KDL-42W805 and Samsung UE40F7000, Philips doesn’t provide a secondary minimalist remote control handset. What you get is a large traditional-looking unit with a satisfying weight and rubberised finish that’s easy to grip. What’s not so traditional about the remote, though, is that if you turn it over, you’ll find a QWERTY keyboard on its back.

This proves really handy for entering wi-fi passwords and internet browsing. It’s easy to use and much quicker than navigating an on-screen keyboard with directional buttons. It’s one of the few times that web browsing on a TV didn’t feel entirely silly.

Those wanting something a little more exciting than a traditional-feeling remote control can use Philips’ MyRemote app (below). It’s compatible with Apple and Android phones and tablets, and does a good job of emulating everything you can do on the traditional unit. The tablet version has a full TV programme guide.

It’s functional, responsive and intuitive, letting you choose between tapping arrows and swiping your way around options. You can also send photos, videos and music from your device to the TV using the SimplyShare feature.

Smart features are steadily increasing in prominence, with everyone trying hard to make TVs more than just a screen. Compared with Panasonic and Samsung’s shiny and user-friendly hubs, Philips’ effort feels a little basic and dated.

It has the essentials – BBC iPlayer, Facebook, Blinkbox – but it’s nothing like the wealth of apps and content that rivals offer. It does have Miracast compatibility, which lets you mirror your phone’s screen on the TV using wi-fi.

The experience is perfectly functional, and the menus are neat and simple, but we would expect something more engaging from a 2013 smart TV. We’d also like it to be a little smoother and faster, as apps are rather slow to navigate and open.

In fact, we’d like navigation to be smoother and faster in general: there’s a slight sluggishness to anything involving a menu. That’s not helped by the menu layout, which has its lovely multitude of options divided into a lot of menus and sub-menus.

It took 26 button presses, for example, to get from BBC Two to the brightness settings, and when we wanted to adjust the contrast, we had to go to a separate sub-menu. It’s true, of course, that you’re unlikely to redo all your options once everything is configured, but it’s still an unnecessarily awkward interface

Thankfully, the performance is worth the effort. With the picture optimised using our trusty THX disc, we switch to a Blu-ray of London 2012 Olympic Games. We found the Philips’ colours to be dynamic and naturally balanced. The picture is bright and clean; the definition is sharp and edges are solid.

There’s a good grasp of motion and enough detail to make us feel better about not getting tickets for any Olympic events at the time. Whites are clean and punchy and blacks are deep, although not as inkily black or as subtly shaded as the the best we’ve seen.

On scenes that mix up bright and dark elements, however, this Philips 42in TV is a little uncomfortable, struggling to get properly black or shine brightly at the same time.

Moving down to DVD and standard-definition broadcasts, the Philips is a very good upscaler. There’s an inevitable drop in detail and sharpness, but the clean picture, brightness and natural, dynamic colours are consistent no matter what source is used.

Time for a bit of 3D, and we switch to Life of Pi. The passive 3D experience is a comfortable one, both in terms of wearing the glasses, which sit nicely on the face, and the smooth ride you get while viewing. There’s the inevitable degree of dimming, but there’s hardly any eyestrain and we would happily watch for hours.

The picture is crisp and detailed and immediately impressive, although the effect of depth isn’t as natural as on the Panasonic TX-P42GT60B.

Philips has another trick up its sleeve, in the form of its Ambilight feature. A series of LEDs line the left and right edges at the back of the TV, shining light onto the back wall.

The lights change colour according to the image on the screen. The picture appears to extend beyond the already inconspicuous bezel – it’s a lovely and surprisingly unobtrusive effect.

You can customise it to suit your surroundings by picking the colour of your wall, changing the intensity of the light, and switching between static and dynamic modes.

We’ve always been fans of this feature: it makes the viewing experience feel more natural, with less eye fatigue and a higher level of immersion.

Sound is the one area where most flat-screen TVs disappoint. Look round the back of the TV and you’ll see Philips’ Ambiwoox technology, a special driver that aims to deliver greater bass and midrange performance.

It works: the Philips sounds nicely weighty across the frequencies, with a decent amount of detail. It’s nice to see a flat-screen TV with voices that don’t sound harsh and tinny.

It’s by no means a replacement for a good set of speakers or a soundbar, but as it is, we could live with the Philips’ sound.

The Philips 42PFL6008 certainly holds its own against its pricier rivals. It’s a very good performer in a lot of areas, and it has some really nice features.

It’s not without its flaws though, which is why it’s getting four stars. If you want a 42in TV with pleasing picture quality and comfortable 3D, the 42PFL6008 is certainly one to consider.