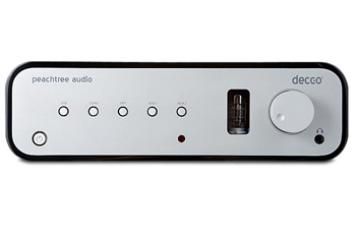 We'd have few complaints if the iDecco turns out to be the blueprint of stereo amplifiers of the future.

It's quite obviously been specified by someone who understands the world of hi-fi has changed, and that compact disc isn't the only viable digital source anymore.

Alongside the increasingly common on-board DAC (with optical, coax and USB inputs) there's also an integrated iPod dock: the dock works well, with the iDecco's simple remote capable of performing most functions.

That said, having to rely on the portable's display means that you're usually close enough to the unit to use its superior interface instead.

Smooth and dynamic
So, how does this well-designed integrated amplifier sound? In short, it's likeable, with a full-bodied presentation and a plentiful supply of sonic smoothness.

Peachtree gives the user the choice of having a traditional valve in the circuit or not.

Press a dedicated button on the uncluttered remote handset, and the valve – visible through a small window on the front panel – lights up a rather pleasant shade of blue.

There's just the faintest of clicks as it comes into circuit – but the change is sound is a little more dramatic. It becomes more rounded, smoother and laid-back.

That said, we'd do without in most systems, as it robs a fair bit of bite from the sound in the process. Still, it could help in a hard, aggressive sounding set-up.

Through the single line level input (yes, only one) or any of the digital alternatives, the iDecco is never less than listenable.

It has a large-scale sound that belies a rather modest 40-watt per channel claimed output and can drive most price compatible speakers to decent levels.

An attractive performer
The amplifier's detail levels are good, as is its ability to cope with dynamic swings.

You can add a high quality headphone output to the list of plus points, too. On the downside, we have no doubt there's greater sonic transparency and precision available for this kind of money.

We're also a little disappointed by the less than obsessive care taken over aligning the front panel to the otherwise good casework – or the vague feel of the volume control.

Still, considering the iDecco's forward-looking specification and its easy, undemanding sound we don't doubt this integrated has plenty of appeal.