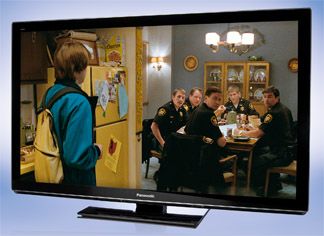 Panasonic’s top TV, the VT30 is a superlative performer in every way

We’re big fans of the TX-P50VT30. Arriving after a spate of great reviews for a variety of Panasonic products, this top-of-the-range TV marched to a glorious five-star verdict when first tested.

Let’s talk specs. As the most premium model in the 2011 range this has all of the company’s shiniest bells and whistles, including Infinite Black Pro, High Contrast Filter Pro and 600Hz Sub-Field Drive motion processing.

Support for SD cards and multiple quality settings make its recording functions more advanced than those of the cheaper TX-P50GT30, and crucially it also comes with two pairs of active shutter glasses and a wi-fi adapter.

What’s round the back?
The back panel is actually identical to that of the £1500 Panasonic TX-P50GT30 which means you get access to all four HDMIs and a USB socket on the left-hand side, while the (largely) less frequently used inputs are positioned in a less accessible, downward-facing recess.

The only problem here is that this is also where the headphone socket is, and while that might not be a concern for many folk, the midnight gamers and movie viewers among us could become quickly frustrated by the awkwardness involved in connecting our cans.

That’s enough griping, though, for the picture is just as good as we saw before. Play the Blu-ray of The Mechanic and the motion processing is a highlight – as the two assassins make their escape after a botched job, the set does a grand job of maintaining its grip on the high-octane action.

The inky blacks enhance give real depth, and the excellent level of insight into dark ares makes it easy to see the expressions on Jason Statham’s face in gloomier scenes.

Plenty of punch to the picture
Unlike many previous Panasonic plasmas, this set can produce a great deal of punch which, combined with that black depth, makes for a wonderfully dynamic and dramatic picture.

As you’d expect, the VT30 has full access to Panasonic’s Viera Connect portal, which includes BBC iPlayer, Acetrax, YouTube, Facebook, Twitter and Skype. Although the integration of these services is less seamless here, than on some of its rivals, it performs well.

If you prefer to watch TV the old fashioned way, the VT30 has Freesat and Freeview HD tuners, and like the VT30 it’s a spectacular performer with HD broadcasts and extremely accomplished at upscaling standard-def content.

Decently solid sound
The VT30 has three speakers – two 6W mid-range drivers and a 10W woofer – and they create a decent soundstage.

The quality won’t blow you away, but by the standards of its rivals, the VT30 sounds pretty solid and weighty, and the V-Audio Surround Pro mode adds a fair degree of chunkiness to movies.

The VT30 is a premium TV that ticks almost every box.