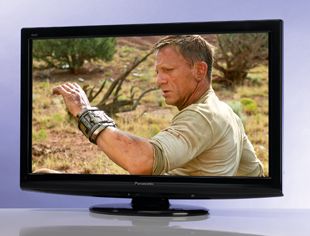 Here we have a 32in TV that’s not only more expensive than some of the leading 37 inch sets out there, but in fact finds itself rubbing shoulders with TVs a whole 10 inches larger (albeit with lower specification). So, what does this affordable but well-specified smaller screen have to offer?

A choice of two HD tuners
Well, if you’re a ‘why take two bottles in to the shower?’ kind of person then look away now, for one of the stand out features of this G20 Panasonic is the inclusion of not one but two high definition tuners.

Yes you have the choice of Freesat HD and Freeview HD here and provided you have the necessary dish and aerial connection for the former you also get access to BBC’s iPlayer.

Panasonic’s VieraCast service is slowly but surely adding some extra content too, with the addition of apps for Skype, Twitter and Acetrax movies.

Connect your TV to your home network via a wired connection or using an optional dongle – this costs around £80 – and you can also use DLNA streaming around your home. Elsewhere you will find Panasonic’s trusty SD card slot, four HDMI inputs, a PC connection, digital audio optical output and the usual smattering of legacy video connections.

Also worthy of note are the two USB connections that not only play your media content, but can also double as recording devices provided a suitable storage device is connected.

The Freesat tuner is a touch cleaner and more detailed than the Freeview, seemingly removing a veil in comparison, whether watching SD or HD content.

That said, both lack a little subtlety compared with the best, with skin tones lacking a little insight and objects missing that sense of three-dimensionality seen elsewhere.

It’s a similar story with video content, where we enjoy what we see and are impressed in isolation but ultimately find this Panasonic TX-L32G20 pipped when put against the best about – yet another demonstration of why comparative testing is so essential to what we do.

Watching the colourful, action-packed romp that is Kick-Ass, we can admire clean, resplendent whites, and black levels as true and deep as any other on test here.

Just a slight lack of subtlety
Skip to a scene with some fast motion and the G20 loses its cool slightly, Panasonic’s Intelligent Frame Creation Pro letting the side down a touch.

But it’s that lack of subtlety we saw with the tuners that sets this screen apart from the best in class – it just lacks that ability to bring a picture really to life.

Consider that it’s relatively expensive, and this Panasonic had its work cut out to get top marks.

But it came close. It’s well specified, with solid HD tuners, decent sound and nice features. Only that last word in detail – and arguably the price – holds this 32in set back.