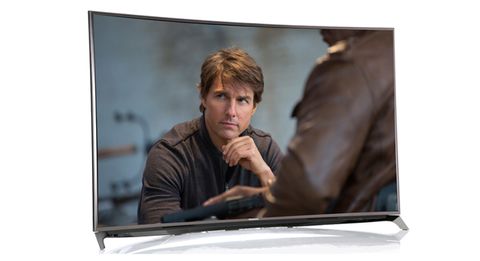 This year has shaped up to be a big one for Panasonic’s TV division.

The launch of the TX-65CZ952B flagship has seen the brand join LG in the 4K OLED arena. Curved screens have also appeared in the brand’s line-up for the first time, albeit not quite to the extent of Samsung.

Instead, Panasonic has saved the latest design trend for its top-ranging CR730 and CR852 series.

MORE: 4K, Ultra HD- everything you need to know

The TX-55CR852B belongs to the latter and is Panasonic’s flagship 55in model: a straight-up 4K LED with HDR support and the latest technology developments that fall under the brand’s ‘4K Pro’ umbrella.

These include new Wide Colour Phosphor panels, which combines new backlight technology and colour filter system for what Panasonic claims is more realistic, nuanced colours using half the energy of a conventional Quantum Dot panel.

It’s complemented by Panasonic’s 4K Studio Master Processor, which draws on picture processing from its ex-top-of-the-range plasma sets to produce levels of brightness, contrast and colour ‘faithful to the director’s vision’.

The curve isn’t exactly conventional; the screen leans back like a laptop opened slightly over-enthusiastically. It’s hardly noticeable when sat directly in front of it, but more so when looking at it off-centre. It won’t be for everyone.

The potential problem with the TX-55CR852B is housing it. Protruding feet at either end of the screen means the telly requires a stand at least 124cm wide.

There’s little to choose between Panasonic’s smart and standard remotes, but we’re rather fond of the latter. Unlike the vanilla plastic tool packaged with lower-ranging models, it’s a plush tool with a shiny brushed-metal finish and large, flat, backlit buttons. It’s the quality you should expect from a TV this pricey.

Friendly and foolproof, Panasonic’s Firefox OS is one of the more intuitive systems we’ve come across. Menus of colourful bubbles – or ‘decks’ – pop up for access to apps, TV or inputs.

And anything from an app to a TV channel or web page can be pinned to the menu with one button press.

It has the substance to match the style too. Complementing the usual Netflix, BBC iPlayer, Amazon Instant Video and YouTube is Demand5 and a Firefox browser. Freeview Play also promises a bundle of live, catch-up and on-demand TV when it finally launches later this year.

You can also use the Firefox OS to beam photos and videos to the TV from any smartphone or tablet on the same wi-fi network.

There's a smattering of connections around the back, including three USB and 4K-supporting HDMI inputs, and a more unusual, but nevertheless useful, SD card slot.

After a mediocre 2014, Panasonic has stepped up the picture performance, having more than one five-star review under its belt. It’s not to be here, but only because the similarly-priced Samsung UE55JS8500 wins out when it comes to out-and-out colour realism and subtlety.

Even though turning colour temperature to ‘Cool 1’ eases out the slight out-of-the-box vibrancy to produce a more natural palette, colours aren’t quite as nuanced as we’d like.

And while there’s apt texture to Draco Malfoy’s hair in the penultimate Harry Potter film, the Panasonic isn’t as subtle with its strokes. In darker dungeon scenes, it struggles to match the Samsung’s level of shadow detail too.

Still, the TX-55CR852B turns in a pleasing performance. It’s bright and punchy and seems comfortable right the way through the flat-out broomstick chase. With a bit of help from the 24p Smooth Film mode, motion is controlled and judder-free.

Contrast is impressive for an LCD set, too. Headlamps shine brightly in Privet Drive and blacks are dark enough to have us thinking back to the company’s plasmas of old; the Hogwarts Express train looks coal-black and during fade-outs the point at which the screen meets the wafer-thin black bezel is often ambiguous.

Without looking unnaturally sharp, edges are so precise and crisply drawn it doesn’t instantly look like an upscaled picture at all. That is until you jump to 4K content, and the added sharpness and extra layers of detail hit you like a slap in the face.

Play Netflix’s Chef’s Table in 4K and food looks positively mouth-watering, salad and sauces bursting with bold, rich colour. Even if it isn’t quite ‘Samsung shrewd’, there’s insight where it counts and a real emphasis on crispness. You don’t need a close-up shot of sushi for its spongy density to come across.

The benefits remain for standard-definition playback, so investing in this 4K telly won’t mean chucking out your DVDs. There’s not a fuzzy line in sight (unless you near-faceplant the screen) and colour reproduction remains somewhere between dramatic and well-judged.

Though a separate sound solution shouldn’t be far down your shopping list, we could live with the TX-55CR852B’s sound. It’s not as rich or big-sounding as we’ve heard from a telly this size, but there’s enough body and balance in the grinding of plates and cutlery. Dialogue is clear and communicative – fairly detailed, too.

Although its more astute Samsung rival pips it to the post for the five stars, the TX-55CR852B is an accomplished performer with a smart index big enough to satisfy the most dedicated couch potato.

It’s a shame its illogical design demands will be a bugbear for some, but get round that and this is a competent all-rounder you’ll be proud to call your own.