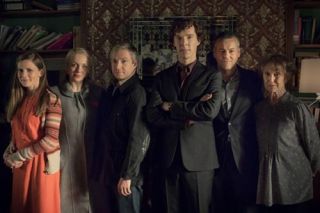 Colossal icebergs, huge waves, temperatures of minus 50 degrees, and the small matter of a war going on with Germans attacking from sea and sky – the Arctic Convoys that shipped supplies to the Soviet Union during the Second World War faced some of the harshest conditions imaginable.

In this documentary, Jeremy Clarkson follows the ill-fated journey of the PQ17 convoy, which is regarded as one of the biggest naval disasters of the 20th century.

Pilot. Based on the 1970s British sci-fi series of the same name, this US remake continues the theme of teenagers with superpowers. Exhibiting telekineses, telepathy and teleportation, the 'tomorrow people' are the next stage in evolution, and naturally they have enemies in friends, family and government.

An outcast group hides in an abandoned subway station, but their safety is compromised when one of them is tempted by the promise of a normal life by a secret military faction that is determined to end their evolution.

Immortal Bard. Another chance to watch this special episode (filmed during the 2012 Summer Olympics) celebrating the life of the world's greatest wordsmith. Guest panellists include Sue Perkins, Bill Bailey and David Mitchell.

Grumpy about Christmas being over, having to go back to work, the torrential rain, and it being January in general? Then let Charlie Brooker ease your pain with anger, despair, sarcasm and laughs as he eviscerates the week's media and news.

A superb war film from Steven Spielberg. Tom Hanks leads a group of US soldiers tasked with going behind enemy lines to rescue the titular Private Ryan (Matt Damon).

The Sign of Three. Another chance to watch this delightful romp of an episode. Mary and John's wedding, the hilarious stag night, an unforgettable best man's speech, and a myriad interconnected cases that will leave you giddy and exhiliarated.

Kitsch. Stephen Fry and Alan Davies are joined by Sue Perkins, Reginald D Hunter and Jimmy Carr in appreciation of all things kitschy.

When two fallen angels are thrown out of heaven, they exploit a loophole to try to get back, even if it will bring an end to the natural order of the universe. A couple of unusual prophets (Jay and Silent Bob), the thirteenth apostle (Chris Rock) and the sulky angel Metatron (Alan Rickman in superb form) band together to convince abortion clinic worker (Linda Fiorentino) that she's the saviour who must stop the fallen angels.

His Last Vow. In the final instalment of the third series, Sherlock Holmes takes on the formidable master blackmailer Charles Augustus Magnussen – a man whom Sherlock truly despises. But with the government reluctant to go up against such a powerful man who knows all of their secrets, will Sherlock be allowed to defeat this dangerous foe?

After two episodes of warmth and comedy, we're dreading what Messers Moffat and Gatiss have in store for us in this episode. We worry about Mary Morstan, we really do.

John Ajvide Lindqvist's chilling novel Let The Right One In and its stellar Swedish film adaptation put a refreshing spin on the vampire genre, albeit one that was bleak, gruesome and melancholy. Naturally, there is an English language version.

Kodi Smit-McPhee portrays a lonely, bullied boy who befriends a strange young girl (played by Chloe Grace Moretz). Little does he know that she's a vampire, who may have a hand in the serial murders plaguing the town.

Ricky Gervais and Stephen Merchant write and direct this charming coming-of-age story set in 1970s Reading. Christian Cooke, Tom Hughes and Jack Doolan star are three working-class boys who yearn for something more in their lives, be it a new job, a new girlfriend, or another chance at life.