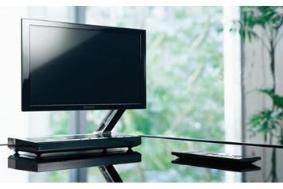 LCD-sized OLEDs "just a matter of time"
Glasgow says that in the next couple of years the company is targeting the 27in screen size for the new technology, currently only available in an 11in tabletop version, the XEL-1.

But with the $2499 price-tag of that model in mind, Glasgow says "It's going to be years until price points come down to where they're anywhere close to LCD. I almost see it as a potential upper end of flat-panel television."

He slso says the technology can be made even more compact and versatile: "Eventually it's printable on a plastic substrate that can bend. But I don't think it's going to take many years to get to that level."

Blu-ray's future
Glasgow is less bullish about Blu-ray Disc, although he seys "It's won the war, that's done.". However, regarding suggestions it will take over from DVD, he says that while some enthusiasts will want the new format, many will be happy with upscaling DVD players. He expects BD will struggle to match DVD's market panetration, pointing out that DVD "was such a big medium change from tape."

Instead, he says, he'd like to see Blu-ray Disc adding greater interactivity, so "you could interface and change things as you want to see them on the screen." He'd also like us to be able to interact with other people via BD software and hardware: "Theoretically you and your friend could watch the same movie, and you could change themes, change endings, all sorts of strange things."

Gonna need a bigger pipe
Talking about internet streaming of movies via the Bravia Wireless Internet Link system, Glasgow says the limiting factor is one of infrastructure. The new Will Smtih movie Hancock is being made available to US TV owners using the technology, but Glasgow says this is just "maybe a step above an experiment."

The problem, he says, is the size of the internet 'pipes', or bandwidth, avaialble: "Japan has much better pipes, so does Korea, so does Europe. So it's still experimental."