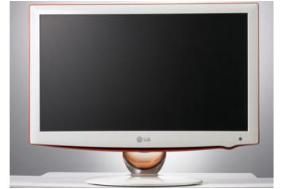 Eight LCD TV ranges are coming, from the compact LU4000 (pictured) and LU5000 series, designed for small rooms and as 'second set' buys, to the top-end, wireless, LED backlit LH9500 55in model.

Meanwhile the plasmas kick off with the value-oriented PQ3000 series and run up to the PS8000 models, which feature a slim design and THX Display Certification.

Here's a glance at some more details, starting with the LCDs:

The LH4000 models, again Full HD and in the same sizes, have 'only' 3 HDMIs and also lose the Intelligent Sensor system.

The LH3000 line-up - Full HD, same sizes - is similar to the LH4000s but with a slightly different panel technology and LG's Invisible Speaker technology.

Deep breath, and on to the plasmas...

The PS8000 Full HD 1080p models, in 50in and 60in versions, feature a unique single-layer design that gives the appearance of a pane of glass. Key features include:

Next step down is the PS6000 Full HD TV, which only comes in 50in, and has single-layer design with the appearance of a pane of glass and a variety of bezel colours to match home décor.

It has a similar spec to the PS8000, but lacks the ISF calibration preparation.

Finally there's the value range, the PQ3000, in 42in and 50in flavours. This range is only HD-ready, has one less HDMI than the PS6000, and has an Auto Volume Leveller system to stop adverts shouting at you.

Finally, some of these models will be appearing in the UK with integrated Freesat receivers. The plan is to add the facility to the LH7000 range later in the year, along with a new PQ6700 plasma Freesat model.