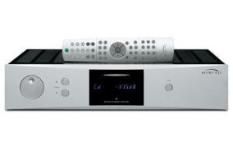 Still talented enough to lead the pack in some ways, but the Myryad doesn't grab music like its best rivals can

Back in 2005, the Myryad MXI2080 was our favourite £1000 integrated stereo amp - an Award that year confirmed its pre-eminent position. Times have changed, and the MXI2080 has some very different competition today.

The Myryad is still an understatedly good-looking machine. Fascia controls are at a minimum, and the blue-on-black digital display is elegant.

Only the lack of a 3.5mm input betrays the MXI2080's vintage - in every other respect, its specification is competitive.

Gallingly, the hair-trigger power switch is still a feature - the MXI2080 may not actually turn itself on or off every time a car alarm goes off, but it's certainly prone to doing so if you brush against it.

Once it's up and running (and this is slightly complex - its pre- and power-amp sections are separate, and must be linked using the two supplied lengths of interconnect), the Myryad takes little time to remind us why we rated it so highly last time out.

The Shortwave Set's No Social is delivered with the sort of rigorous precision that makes the likes of the Moon seem almost ragged by comparison.

In terms of sheer insight, the MXI2080 takes some beating: it's able to describe a soundstage explicitly, and gifts vocalists the sort of resolve and directness lesser amps can only dream of.

Getting the balance right

The Myryad shows a fine unity of sound, too, with decent solidity to the low frequencies, crisp attack to treble sounds and smooth integration of the entire frequency range.

Where the Myryad has lost ground is in the more visceral aspects of music-making.

There's no shortage of precision to Tom Waits' The Return of Jackie and Judy, but the more elemental aspects of the song - its rollicking tempo, ramshackle percussion and caterwauling vocal - are neutered by the Myryad's rather prissy insistence on technicality over emotion.

The MXI2080 is the most meticulous amp in this test, but it has little stomach for a fight - it gives the impression of being overwhelmed by the song, where its rivals can give as good as they get.

But while it's no longer class-leading, the Myryad still gets a lot right. If an assiduous, precise presentation sounds like your thing, give it a listen. Just keep well away from that power switch.